By Sheng Menglu and Li Rongde 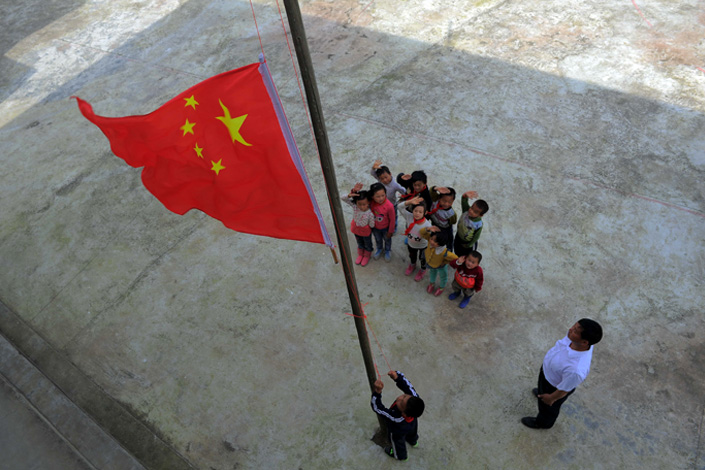 Wu Guoxian (right) and some of his students attend a flag-raising ceremony in Gugang Primary School in Qiannan prefecture, Guizhou province, on May 31. The rural school has only 11 students, and Wu, 50, is its only teacher. He also fills other roles at the school, including cook and cleaner. Photo: Visual China

(Chongxin, Gansu province) — In a rural corner of northwest China's Gansu province, a primary school principal on the verge of retirement said he has been trying for years to recruit new teachers without any luck.

Daxing Primary School in Chongxin County has five male teachers — all in their 50s — teaching a total of about 40 students in grades one through six. Because there are only a handful of students in each grade, children of different ages are lumped together. None of the teachers at Daxing has a college degree, and they say they are unable to teach subjects such as music and art, which are part of the curriculum.

Thousands of small schools in sparsely populated villages or remote mountain areas face similar challenges. They are trapped in a vicious cycle of ebbing enrollments, a dwindling number of teachers and limited funds.

Four years after the central government scrapped plans to shutter small village schools, it is taking steps to breathe life into the few that have survived.

The Ministry of Education is drafting a set of standards to govern the levels of funding allocated to rural schools, qualifications of teachers and other facilities, Wu said. The guidelines are expected to be released next year.

Nearly 96% of rural schools in Gansu have fewer than 100 students, according to the latest government data. Whether to continue running these empty shells — some with fewer than 10 students per grade — has become an ongoing issue for educators and authorities.

The small village school is the only one within walking distance of students like 12-year-old Zhang Na. Without it, she would have to attend a boarding school in a nearby town. That school is only a 30-minute drive away from her home, but because buses are infrequent and costly, Zhang would be able to see her family only once every few weeks if she attended that school, she said.

China's rural education landscape has undergone massive changes in the past two decades. Village classrooms started to slowly empty after millions of farmers, who were going to cities in search of work, started to take their children with them. Nearly 169 million rural workers migrated to cities in 2015, according to the National Bureau of Statistics. Many of the children resettled in the cities with their families.

Meanwhile, the number of school-aged children dropped sharply as a result of the one-child policy, enforced for three decades before it was scrapped in October 2015.

The number of students at Daxing Primary School has dropped by more than half, to about 40 children in the past 20 years, said its principal, who gave only his surname, Lian.

Over the years, village education budgets have dried up, leading to an exodus of teachers.

As a result, the Ministry of Education in 2002 began closing thousands of village schools and moving students to schools closer to towns and cities. The plan was scrapped a decade later after research showed it was affecting millions of children in impoverished regions like Gansu by limiting their access to basic education.

From 2010 to 2015, two-thirds of the rural schools in the country, or about 300,000 schools, were shut down by local authorities, the Ministry of Education said.

From 2001 to 2004, thousands of students aged 7 to 12 were told to commute to schools in a neighboring village or the more-developed county center after education authorities ordered the closure of three-fourths of the village primary schools in the county.

School buses in these remote villages often have drivers without required licenses, and the vehicles carry scores of children, well above the buses' carrying capacity.

Fifteen primary school students were killed and eight others injured in a school bus accident in Fengxian county, Jiangsu province, in December 2011. The 52-seater, which operated without a license, was carrying 70 students when it overturned and slammed into a ditch.

Some parents said they opted to send their children to boarding schools in the next big town or county because they didn't want them spending hours commuting to school.

But many of these boarding schools were overcrowded, with 40 to 50 students crammed into one classroom, and the schools often lacked a cafeteria. Chinese media reports have exposed many instances where children as young as 8 were told to bring a small firewood stove to school to cook their own meals, or were eating bread, pickles and other cold food that they had brought from home throughout the week.

Small village primary schools with fewer than 100 students have closed at a much slower rate because parents — especially those in remote mountain areas or thinly populated regions that lacked a proper road network — preferred to send young children to schools near their homes. Therefore, only one-fifths of these small schools were shut down from 2001 to 2015, government data showed.

The ones that survived the ax are struggling due to a lack of funding and qualified teaching staff.

Nearly 30% of teachers at small rural schools are "stand-in" teachers who are not on the government payroll and are instead paid by parents because these schools lack funding to hire qualified teachers, said professor Wu Zhihui of Northeast Normal University, who surveyed 180 rural schools in 12 provinces and regions last year.

Lian, the principal of the Daxing school, said the government offered a monthly bonus of 400 yuan ($58) to teachers working in rural village schools, but this was not enough to attract young teachers to these remote regions.

The Daxing school does not have running water, and the teachers have to walk 30 minutes each day to fetch drinking water in buckets, Lian said.

Four out of five teachers working in rural schools in poorer parts of western China, including Gansu, have to teach at least three subjects due to a short supply of qualified teachers, the study found.

Though 70% of China's population is expected to live in cities by 2030, small schools will continue to play an important role in the country's education system, Wu said.

He said one-third of primary schools the U.S., where 85% of the population lived in urban areas, are small neighborhood schools.

New government guidelines could help minimize the gaps between urban and rural schools. Less than half of rural primary schools had access to the internet compared to 91.5% of schools in cities at the end of 2015, Wu said.

These moves could also help push up enrollments. Nearly 55% of the parents Wu surveyed said they would prefer to send their children to primary schools close to their homes if the teaching quality were to improve.

Some small rural schools in Chongxin county have seen an uptick in admissions in recent years due to support from several non-governmental organizations such as the Beijing Western Sunshine Rural Development Foundation, which helps schools in poor parts of western China.

Several NGOs have poured in 30 million yuan to fund teacher training programs and distribute books that can supplement the state curriculum, said Niu Qishou, director of the local education bureau that administers schools in Chongxin county.

As a result, enrollment levels at Qinjiamiao Primary School in the county doubled from 2014 to 2015 to 160, Niu said. More than 1,900 students who used to attend boarding schools in the developed county center or nearby cities have returned to village schools from 2014 to 2015, he said. And this number has doubled from 2015 to 2016, a sign of revival among rural schools, Niu said.

Update: The headline of this story has been changed to better reflect the content of the article.