By Yuan Suwen and Teng Jingxuan 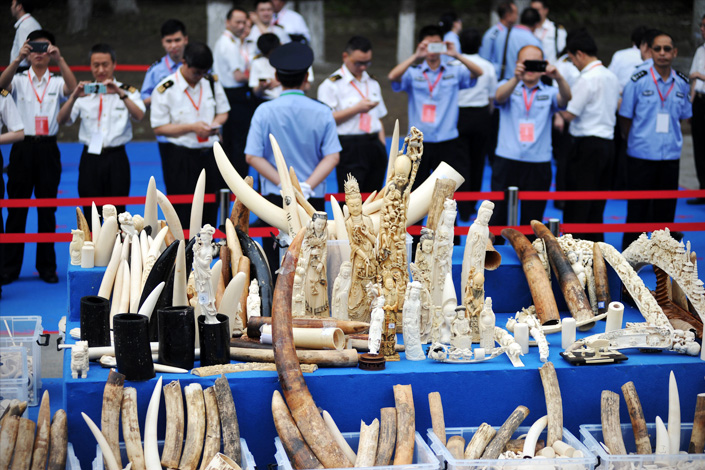 Nearly 662.5 kg of confiscated ivory and ivory products are displayed before being destroyed during a public anti-ivory-trading event at the Beijing Wildlife Rescue and Rehabilitation Center on May 29, 2015. Photo: IC

China may be buckling to pressure from legitimate ivory vendors by delaying the release of a timetable for phasing out the nation's ivory trade, a wildlife advocacy group said.

In June, government representatives said a timetable for an ivory trade phaseout would be completed by the end of 2016. They delivered the pledge during the eighth U.S.-China Strategic & Economic Dialogue meeting in Beijing.

But as of mid-December, authorities had yet to release a timetable for implementing the proposed ban. And a forestry administration spokesman told Caixin he had no information on the process.

Zhou Fei, China director of the nonprofit watchdog Traffic, which monitors wildlife-related trading and supports an ivory ban, told Caixin that "it's possible that the (timetable's) release will be delayed."

Zhou said consumer demand for ivory products is strong in China. As a result, he said, the nation's legal ivory processors, retailers and other businesses might be haggling with the government over details of the proposed ban.

Businesses might be pressing the government for a compensation plan that would help them recoup revenues that would be lost under a ban, Zhou said. Or they may be lobbying for a long grace period that buys them time until ivory is barred from the market, he said.

Bureaucracy also may be standing in the way of a timetable release. Zhou said a ban would "involve more than one government department," and that they would "have to coordinate the dissolution or restructuring of existing ivory businesses."

Legal traders can currently tap two government-approved elephant-ivory sources: existing stock imported before China joined the Convention on International Trade in Endangered Species of Wild Flora and Fauna (CITES) in 1981; and what was originally a 62-ton stockpile of ivory imported with CITES' permission in 2008.

Ivory processing plants and retailers in China must be licensed, and each ivory product must be catalogued and tagged with a photo ID.

A ban would reduce the volume of illegally sourced ivory traded in China but would not directly affect the nation's illegal-ivory market, which CITES said is the largest in the world.

Indeed, enforcing laws already in place has proved challenging. For example, according to critics of the legal trade system, the ID photos for legally sold ivory products are so small that they can be easily used to sell similar-looking but illegal products.

An unscrupulous trader can also get around Chinese laws by setting up a company in Hong Kong, where illegally sourced ivory can be processed and disguised as legal ivory.

A ban on all domestic ivory trading would "eliminate the possibility that ivory from illegal sources is laundered through legal outlets," CITES Secretary-General John E. Scanlon recently told Caixin.

Although there is now "strong demand among China's middle class for ivory products," a ban on all trading could drive down that demand, Zhou said.

Persistent demand was underscored by a National Geographic Society survey last year in which 56% of Chinese who were questioned said they wanted to buy ivory.

But 79% of those surveyed said they would support a complete ban on the trade, suggesting some consumers who want to buy ivory might change their minds if a ban were to take effect.

Zhou's group wants the government to make good on its pledge to ban ivory and reject any demands for a long delay.

"The government should not allow for a grace period of more than two years before the total ban takes effect," Zhou said.

Zhou said the world's elephants, whose tusks are harvested for ivory, cannot wait any longer for China to enact a ban.

A CITES ban on international ivory trade in 1989 has helped some populations of Asian and African elephants recover. But the animals are still under pressure from poachers catering to Asian demand, according to the World Wild Fund for Nature.