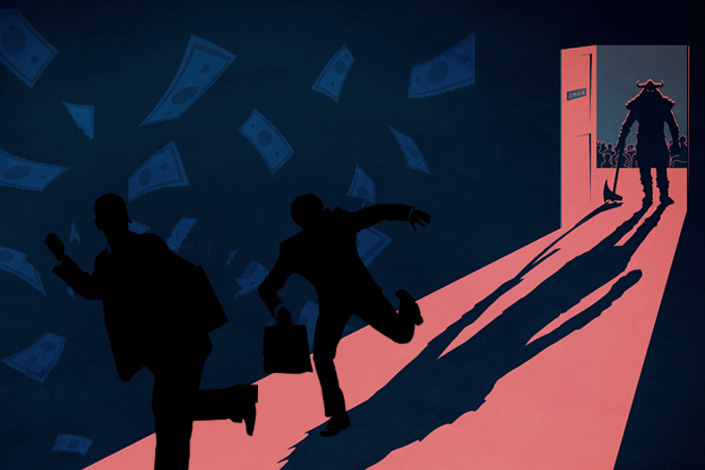 (Beijing) — China's insurance regulator is clamping down on aggressive takeovers by insurance companies that rely heavily on investment-linked policies and are controlled by a parent that faces few constraints on how it can exploit its insurance subsidiary.

A closer examination of Foresea Life Insurance, one of the companies caught in the spotlight, sheds light on why the regulator is worried about their sales, investment and shareholding structure.

Foresea rose to prominence in China this year for the role it played in a hostile takeover bid made by its parent, Baoneng Group, targeting the country's leading home developer Vanke.

For the insurer, a low-key transaction with a sister firm in April has proved to be a crucial link in a contentious maneuver allowing it to post billions of yuan in profit rather than a loss in the first six months of this year.

In April, Jushenghua transferred all of its voting rights in Vanke to Foresea irrevocably and free of charge, raising the latter's stake in the developer to just above 20% of its total shares.

This transfer allowed Foresea to claim roughly 8 billion yuan ($1.16 billion) in paper gains on its Vanke investment in the first half of the year, according to data from a document Caixin has seen. Without this profit, the insurer would have posted a net loss.

Foresea's net profit for the first six months of the year was 6.3 billion yuan. This included earnings from securities and property investment, which totaled 12.9 billion yuan, according to the firm's financial statements.

Under accounting rules, Foresea can consolidate the paper gains on its holdings in Vanke only when it has ability to exercise "significant influence" on the firm it has invested in. This usually means a company holds at least 20% of the firm it has invested in, has representatives on the firm's board of directors and/or can influence the firm's decision making and strategy implementation.

Critics have questioned whether Foresea fits this bill, even after the voting rights transfer.

Without the paper gains, Foresea would have posted massive losses that could have shaken investor confidence and possibly choked off premium income if customers feared they would lose money on their investments.

Foresea is under more payout pressure than many other insurers because it sells more universal policies — high-yield, short-term policies that appeal to buyers as an investment tool rather than insurance. It is one of several companies censured by China's insurance regulator lately for relying too much on the costly policies, which provide insurance in name only.

Investors on average can make 4% to 8% in returns on universal policies purchased from Foresea, or Anbang Insurance and Funde Sino Life, two other insurers engaged in selling investment-type policies, according to research carried out by investment bank China International Capital Corp. By contrast, wealth management products offered by banks with three-month tenures offer returns of about 4%.

On top of high yields, universal policies also allow buyers early penalty-free cancelations in as little as three months after purchase. This creates a huge amount of uncertainty in terms of cash flow and liquidity management for the insurers.

Diversifying portfolios and increasing stock investment is one way to improve returns in a low-interest environment, but it is risky compared with fixed-income investment. China caps insurers' equity investments at 30% of their portfolios. Currently, the average ratio stands below half that level, according to Guangfa Securities.

The regulators are concerned, however, that some insurers may have exceeded the limit.

But the CIRC is even more concerned about the lack of checks and balances on how an insurance company makes important decisions. While public data show that no company controls more than 51% of an insurance arm, some clearly have more control.

Wu Xiaohui, chairman and CEO of Anbang, for example, has absolute control over the company through arrangements that analysts say may have been designed to skirt government restrictions on single-shareholder stakes, according to a Caixin investigation last year.

Foresea, too, has a shareholding structure that has been criticized for giving Baoneng undue influence.

Commercial registration documents filed with the government show that four of Foresea's minority shareholders used to be subsidiaries of Baoneng and are likely still connected to it. Jushenghua, for example, holds 51% of Foresea.

One of Foresea's minority shareholders, which owns 20% of the firm, is controlled by Sun Lingling, a former Baoneng employee. The documents show that Sun personally spent 1.7 billion yuan taking over the company from Baoneng several years ago. Baoneng kept her on its payroll until two months after Foresea got permission in 2011 to be established.

Through Jushenghua, Baoneng has invested 11.7 billion yuan in Foresea. The insurer paid, however, a combined 14.4 billion yuan in 2014 and 2015 to acquire property firms and projects from Baoneng and companies related to it.

More recently, Foresea has played a crucial role in Baoneng's acquisition of Vanke shares. Much of the 43 billion yuan Baoneng has used to buy Vanke shares since last year came from the premiums received by Foresea, according to previous Caixin investigations.

Through Foresea and Jushenghua, Baoneng owns about a quarter of Vanke and is its biggest shareholder. The acquisition has met with fierce resistance from Vanke's founder and chairman, Wang Shi, and the rest of the firm's management team.

Criticizing Baoneng as "barbarians," Wang has appealed for help from investors and financial regulators on the grounds that the unwanted suitor has put Vanke's reputation, its development and the interests of other shareholders at risk. The expression has reverberated in the speeches of regulatory officials when they later pounded on firms making risky acquisitions using premiums.

In an open letter released in July, Vanke also requested that the regulators examine whether Baoneng had broken the law in using funds from asset management plans to buy Vanke shares.

Recent coordinated actions by the China Insurance Regulatory Commission (CIRC) have targeted Foresea, Evergrande Life Insurance and several other insurers known for aggressive equity investment and selling universal policies. Foresea has been ordered by the regulator to stop selling universal policies — which accounted for more than 80% of its revenue this year — until further notice.

The regulator has also vowed to examine the complicated corporate structures that allow one company to hold more shares than are allowed in an insurance firm. It said Tuesday it planned to lower the ceiling — which is now 51% — on the proportion of shares a single investor, along with its related parties, can hold in an insurance company.

The government raised the ceiling in 2013 from 20% to 51% to address the deadlock resulting from power disputes.

"This solved the problem of equally powered shareholders fighting with each other, but created a new one," said a source close to the regulator. "Now the majority shareholder gets to control the insurer completely, and there are many problems with related-party transactions."

Xiang Junbo, chairman of the CIRC, said the commission will revise related regulations and strengthen scrutiny of related-party transactions to prevent "ill-motivated" investors from getting into the insurance industry.

Xiang did not elaborate on what he meant by "ill-motivated."

One way a company can exploit an insurer is by using premiums in leveraged buyouts that serve the company's own interests at the expense of other investors and insurance buyers. Some companies have arranged questionable deals for their insurance subsidiaries, such as buying assets from themselves at apparently elevated prices, said an analyst who has tracked the industry for many years.

"This grossly hurts the interests of the insurance company's minority shareholders and its clients," he said. "It also creates a big financial risk."