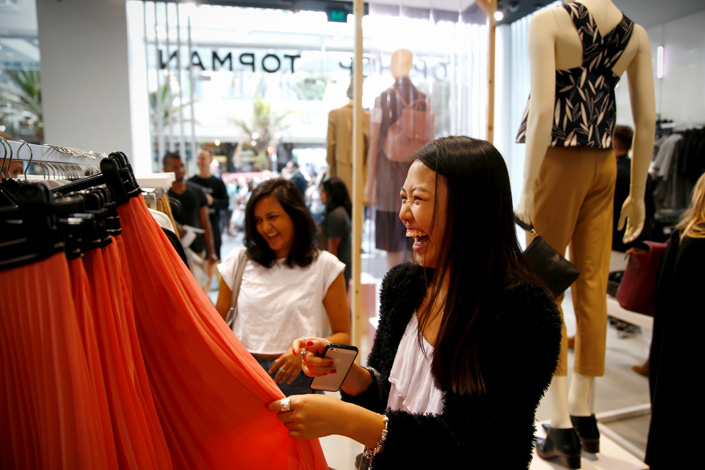 Shoppers look through clothes on sale on the opening day of New Zealand's first Topshop and Topman store on March 12, 2015, in Auckland, New Zealand. A British high-end brand beloved by celebrities, Topshop opened its first official physical store in Beijing on Aug. 28, 2015, at the Galeries Lafayette mall. Photo: Visual China

(Beijing) — British fast-fashion retailer Topshop said it plans to set up the first set of flagship stores on the Chinese mainland in 2018, despite receding in-store sales amid a boom in e-commerce.

The high-street fashion label said it will launch an inaugural store on the mainland in spring or summer 2018. There are currently three Topshop-branded stores in Hong Kong.

The move comes four years after Topshop started testing the waters in one of the world's fastest-growing retail markets. In 2012, fashion boutique Fei Space was franchised to sell some of Topshop's designs in Beijing.

Topshop also partnered with Fei Space to set up several "pop-up stores" in Beijing, Shanghai and Shenzhen to understand the fashion tastes and purchasing habits of young Chinese consumers.

But earnings at some of these temporary outlets fell short of expectations because in the past few years, offline retailing has taken a hit due to the rise of e-commerce, a person linked to Topshop's China operations told Caixin.

Among the handful of pop-up stores, two are still operating as wholesalers, in Beijing and Shenzhen.

The store in Shenzhen will continue to sell Topshop-branded items, the store manager told Caixin.

The Beijing store hasn't received any information from the British company about its expansion plans, a salesperson at the store said.

But employees at both outlets said that a growth in online sales has dented their offline business. According to a recent Accenture report, 73% Chinese consumers tend to shop online, well above the global average of just over 40%.

The Shenzhen store manager said that when Topshop representatives first met her in 2011, the company was focused only on opening brick-and-mortar stores.

But three years later, the brand changed course and entered into a partnership with local online apparel retailer Shangpin.com — an e-commerce business with 30 million registered users — to sell both Topshop and Miss Selfridge brands. Shangpin has been authorized to operate the online business both on its website and China's largest e-commerce platform, Alibaba's Tmall marketplace.

Last month, British retailing giant Marks & Spencer shuttered 10 China stores and laid off more than 400 workers as part of its global refocus from clothing to groceries.