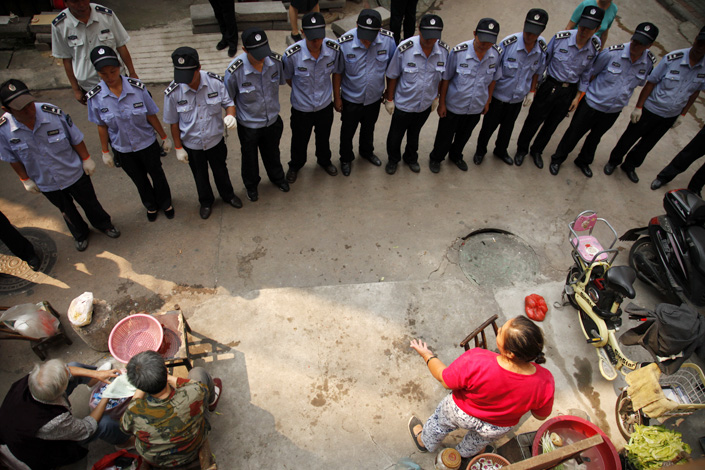 A line of city management officers, known as chengguan, stare in silence at an illegal street vendor selling vegetables in Wuhan, Hubei province, on Sept.19, 2012. Critics of the harsh enforcement want chengguan to change their enforcement style. Photo: IC

(Beijing) — In April, an iconic statue of Ronald McDonald that was standing outside a McDonald's restaurant in Guangzhou was torn down and taken away by a group of city management officers for "obstructing a public walkway" after the restaurant ignored calls to remove it, according to the officers.

People learning of the news online were amused by this "arrest" made by city management authorities, better known as chengguan. But anger has been the more common response to these officers because of their reputation for excessive use of force — smashing stalls of street hawkers and demolishing illegal apartment blocks, sometimes without prior warning.

Heightened public resentment toward chengguan officers — which are tasked with helping local governments keep city streets clean and cracking down on unlicensed construction — prompted the central government to roll out a set of rules in December 2015 to shake up the force.

But policymakers have yet to flesh out detailed laws that would better regulate the chengguan officers and prevent local governments from using them arbitrarily as enforcers.

Under the reform, a central government agency, the Ministry of Housing and Urban-Rural Development, has for the first time been charged with regulating the force that earlier was under the sole purview of local governments.

Housing Minister Chen Zhenggao outlined several measures in March to shake up the chengguan force, including requiring officers to maintain a video log of their interactions with the public, a rule that took effect in November.

The order might curb the excessive use of force by officials. But critics say it does little to help uphold the chengguan authority as a credible law enforcement unit. Nor does it address the problem of violent attacks from the public that view chengguan officials as meddlers, given their lack of a legal mandate.

Critics say lax oversight from the central government had allowed local authorities at times to use chengguan officers to carry out the "dirty work" that other, more rule-bound agencies are reluctant to touch, such as evicting tenants or ridding streets of food stalls.

In 2014, four chengguan officers in Linwu county in central China's Hunan province were given prison sentences ranging from three and a half to 11 years for beating a watermelon seller to death.

In one highly publicized case in 2009, Xia Junfeng, a laid-off factory worker who ran a roadside barbecue stall in the northeastern city of Shenyang, killed two chengguan officers and critically wounded another after the officers confiscated Xia's barbecuing equipment.

In Guangzhou alone, 600 chengguan officers are wounded each year while on duty, official data showed. At least three officers have been killed in the second half of this year as a result of deadly confrontations with street vendors.

Local government officials are also partly to blame for this tarnished reputation of chengguan officers because lower-level authorities have been using them for decades to bend the law when needed, according to the head of a district-level chengguan bureau in Fujian province.

"We usually just do what the governments want us to do, regardless of whether it is illegal or whether it is within our job description," said the chengguan official who asked not to be named.

In one incident in 2013, chengguan officers bulldozed a shop without issuing an eviction order in Yutan township in Hunan province at the behest of the local government, according to the Xiaoxiang Morning Post. The county chengguan authority later said officers were cooperating with the township government on clamping down on unlicensed buildings.

The unarmed but uniformed force has been operating in a legal gray zone since it was established three decades ago. To date, there are no laws authorizing them to carry out the tasks they have been entrusted with, leaving chengguan officers in legal limbo, according to a city management official in the southern city Guangzhou.

"Police have handcuffs, and authorities from the local industry and commerce departments can revoke business licenses from illicit operators. But what do we have to make people comply with the rules?" he asked.

"The sight of a uniformed chengguan officer was enough to send vendors packing back in 1997, but it's no longer the case nowadays," said one chengguan official in the city of Fuzhou, Fujian province.

There are about 450,000 chengguan officials in China, recruited through a competitive civil service exam and working for local government agencies at different levels. But there are no minimum qualifications for the 1.35 million chengguan assistants across the country.

The chengguan force needed a major shakeup with more detailed regulations to govern them if the government was to regain public trust, said Wang Yi, director of the City Management Research Center at Yangzhou University. The lack of clear rules has created a problem, with the officers believing they were at a disadvantage due to a lack of legal protection, while in the eyes of the public they were actually a symbol of suppression, he added.

Reform and its problems

On top of the video log requirement put in place last month, chengguan officers were given new responsibilities by the Housing Ministry, including issuing parking tickets and punishing polluting factories and construction sites that caused noise and dust pollution without giving chengguan officers the legal mandate.

But this would overstretch the already understaffed chengguan force, according to Wang from Yangzhou University. And chengguan officers lack the professional skills needed to enforce noise limits and other ordinances, he said.

Other critics say giving them an expanded role, without the required legal mandate to carry out their tasks would make their jobs harder and increase public resentment toward them.

For example, even traffic police in China struggle to issue parking tickets, with violators using fake license plates or even resorting to veiled threats to avoid penalties. Entrusting this work to a team of city management officers would only make the problem worse.

Last year's rules also would not address the problems chengguan officers faces nationwide because without legislation, local governments can still order them to do whatever authorities wanted, said professor Yang Xiaojun at the Chinese Academy of Governance.

A lack of legal oversight has also left room for corruption. At least 50 chengguan officials in Guangzhou have been charged with irregularities, including taking bribes, since 2009, official data shows.

Some critics have called for the force to be disbanded, saying their functions overlap with those of the police and other local government agencies such as environmental protection bureaus.

And many chengguan officers themselves are reluctant to take on new responsibilities. A chengguan official from Guangzhou said, "Unlike other government departments where people vie for more power by expanding their turf, none of our people want to take on more tasks as we are often left to do what other law enforcement agencies are reluctant to do."