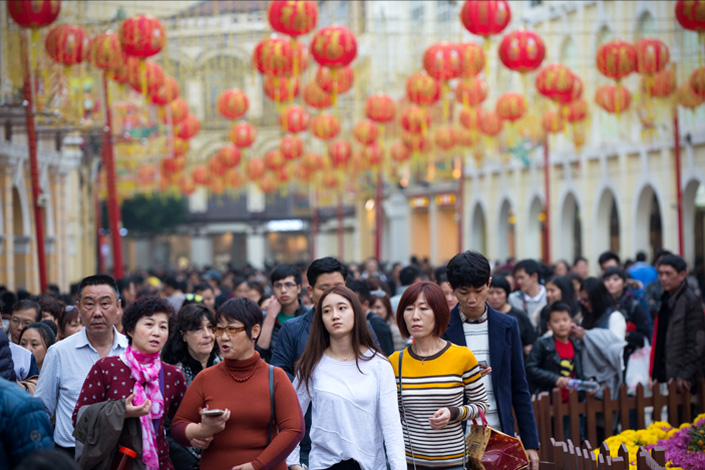 (Beijing) — Chinese travelers are expected to spend 100 billion yuan ($14.5 billion), while on vacation outside the mainland during the upcoming Chinese New Year holiday in late January and early February, according to Ctrip, China's largest travel services website.

Rising incomes and friendlier visa policies for Chinese passport holders have allowed more people to break away from the tradition of spending the Lunar New Year at home. And a depreciating yuan is unlikely to make a significant dent in travel numbers, the company said in a report last week.

Ctrip predicts that about 6 million Chinese will travel outside the country during the seven-day holiday, also known as the Spring Festival, which starts on Jan. 27.

Nearly 5.2 million people traveled abroad during the 2016 Lunar New Year, a 10% increase from a year earlier, according to the latest data available on the website of the China National Tourism Administration. A research group under the government's tourism agency and Ctrip together estimated Chinese travelers had spent 90 billion yuan, while on trips abroad during the 2016 Lunar New Year.

Spending the traditional holiday overseas remains a popular option for the country's growing middle class despite the recent slide in the value of the yuan, which makes overseas travel more expensive. The People's Bank of China set the central parity rate of the yuan at 6.9508 per dollar on Friday, the lowest value since May 2008. But most travelers won't cancel arrangements because they "only travel overseas once or twice a year and usually made travel plans two months in advance," the company said.

Thailand, Japan and the U.S. are so far the most popular planned destinations for Chinese travelers for the 2017 Spring Festival, according to bookings made on Ctrip, the company said.

While the cost of traveling to countries such as Thailand, the U.S. and the Philippines for the 2017 Spring Festival are expected to increase 3% to 15% from the same period last year, a host of other destinations vying to attract Chinese travelers have relaxed visa rules and increased the number of international flights, pushing down costs, according to the report. These destinations include South Korea, Singapore, Italy and Turkey.

Although China has become the top source of international outbound travelers with 120 million people visiting foreign countries in 2015, the potential of the market is still big, as less than 10% of the population have passports, Ctrip said.

In November, President Xi Jinping said during the APEC CEO Summit in Peru that Chinese tourists will make a total of 700 million overseas trips in the next five years.