Move to Classify Smog as 'Meteorological Disaster' Meets With Derision 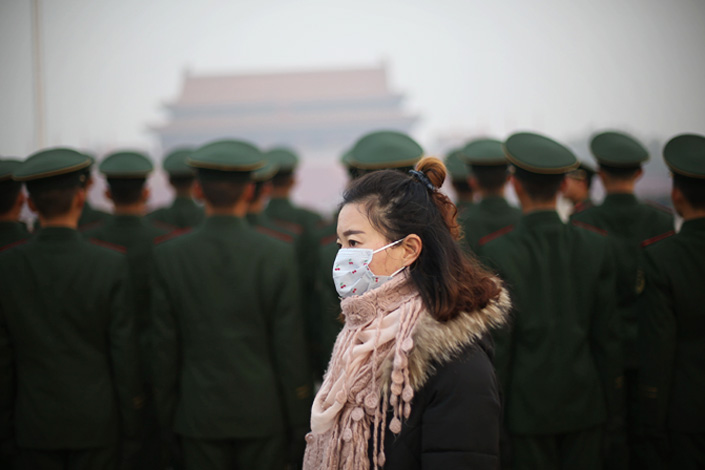 (Beijing) — City authorities in Beijing have come under fire over a draft regulation they proposed to local legislators that seeks to classify smog as a "meteorological disaster."

The capital's legislature, the Beijing Municipal People's Congress, released the second revision of the draft document on its official website on Dec. 1. The document explicitly defined smog as a meteorological calamity — along with storms, heat waves and droughts.

The city's legislature, which wrapped up a third reading of the draft regulation in late November, has yet to set a date when it will put the proposal to a vote.

But the draft law has met with intense scrutiny in recent days after the Beijing Meteorological Service sought to drum up support for the move by feeding media outlets with comments from academics in favor of the proposal.

Li Xiaojun, a deputy head of the Legal Affairs Committee under the city's lawmaking body, said the proposed legislation was aimed at bolstering public awareness of disaster mitigation, and was aimed at finding more effective methods to tackle disasters.

Xu Xiangde, an academic at the Chinese Academy of Engineering, was quoted by the Beijing News as saying that smog has been a meteorological phenomenon since ancient times, and in the past, smog particles were largely composed of dust and pollutants from ash.

Many other countries, including the U.K., also list smog as a meteorological disaster, although man-made pollution has made smog even worse, Xu said.

However, the proposed definition has raised concerns among other academics that the law could be used by the city government as an excuse to skirt its responsibility to address the city's pollution problems.

Meteorological disasters are events beyond our control, while smog has much to do with human activities, so it would be unscientific to define smog as a meteorological disaster, said Zhang Zitai, director of the Center for Environmental, Natural Resources and Energy Law at Fudan University.

Lu Zhongmei, a deputy head of the social and legal affairs committee of the top government advisory body, said it was absurd for the city's Meteorological Service to back such a law because other forms of air pollution such as acid rain could then be listed as meteorological disasters at will.

Once smog is classified as a disaster by law, it will compromise efforts to fight pollution because it amounts to telling the public that smog is not a result of pollution, said professor Liu Hongyan from the Chinese Academy of Social Sciences' Institute of Law Studies.

Regional governments have undoubtedly been playing a major part in tackling air pollution as has been demonstrated in efforts to fight the latest bout of smog, which has enveloped much of northern China, including Beijing, Tianjin and Hebei province.

Pollutants emitted from vehicles and dust from construction sites have dropped by a third since authorities introduced a red smog alert late Friday, which has gone some way to easing its impact, according to municipal environmental authorities.

Smog will continue to affect the region until Thursday, but its intensity will not be as high as bouts of smog in November, authorities said.