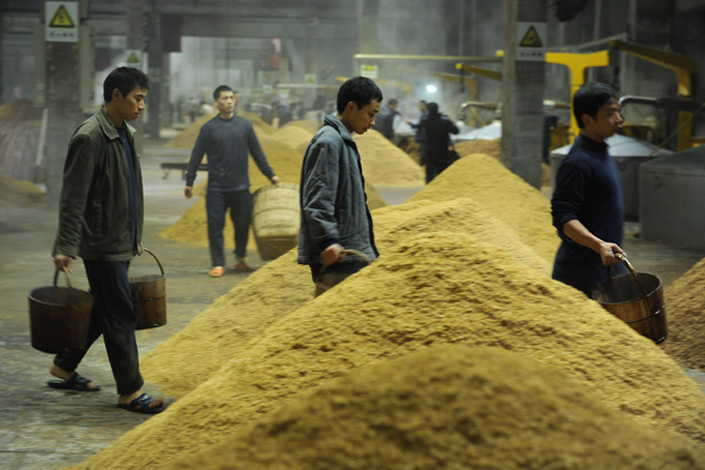 Wuliangye is China's second-biggest maker of baijiu, a fiery local brew packed with an acrid punch. Its sales had recovered this year from the industry hangover that followed President Xi Jinping's crackdown on luxury spending among Chinese officials launched in 2012 — a policy that hit high-end liquor producers hard.

The latest private placement will see the stakes held by Wuliangye's largest shareholder, an investment company wholly owned by the city government of Yibin, Sichuan province, and its affiliates fall 1.44 percentage points to 54.63%. It is part of a larger effort to reform state-backed enterprises by pushing for a mixed-ownership model.

But market observers said that the deal won't significantly change the structure of Wuliangye, the country's second-largest liquor maker by revenue after Kweichow Moutai Co. City government authorities in the southwestern province where the company is based will continue to hold a controlling stake in it.

"It is impossible for such state-owned giants like Wuliangye to move toward a mixed- ownership model overnight," Zhu Danpeng, a researcher at the China Brand Research Institute, told Caixin.

Moutai announced a similar plan to increase stakes held by employees and distributors, but no progress has been reported on this front so far.

Zhu said the reform will help fuel future growth by better aligning the interests of employees and distributors with that of Wuliangye's own profit targets.

The high-end liquor industry has soured in the past four years after the central government began a nationwide anti-graft campaign. As baijiu is often served in official banquets and as a bribe, both production and sales of the alcohol in 2013 dipped to the lowest level since 2009, and the market value of 14 listed baijiu makers shrank by more than 40% that year.

Wuliangye, which sells high-end liquor, suffered its first loss in nearly a decade in 2013. But the industry has shown signs of recovery as demand shifts from official banquets to households spending more on luxury brands, according to analysts.

Mixed-ownership reform in the baijiu sector was kicked off last year with Hebei Hengshui Laobaigan Liquor Co. Ltd.'s issuing additional shares to employees and distributors. In July, the government handed the majority shares of Tuopai Shede Wine Co. to a private group.

Both companies saw their profits rise, partly due to changes in ownership. Tuopai's net profit surged by 1,287% in the third quarter of 2016 from a year earlier, right after its major owner was replaced by Hong Kong-based SkyOcean Group Holdings Co., Ltd.