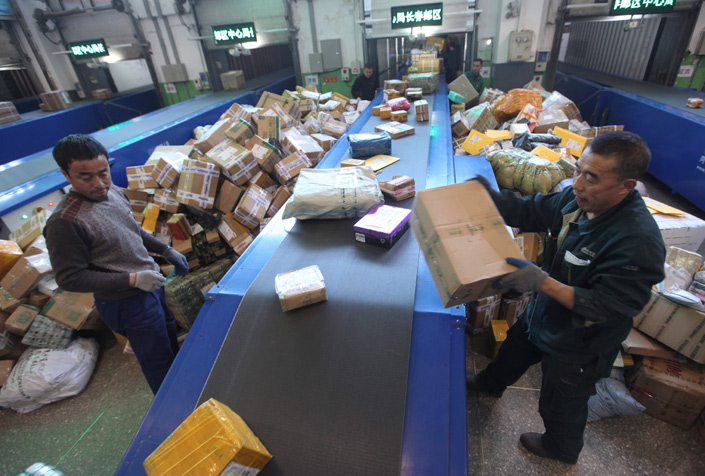 (Beijing) — Chinese parcel deliveries passed the 30 billion mark for 2016, representing 23 packages for each of the nation's 1.3 billion people, according to new data released by the State Post Bureau.

A tea farmer in southeast China's hilly Guizhou province sent out the milestone 30 billionth parcel of the year on Tuesday using private courier ZTO Express, one of dozens of major private couriers to spring up over the last decade to compete with the older China Post.

Fueled by the world's largest and fastest growing e-commerce sector, China's delivery volume surged has surged by over 50% annually since 2012. This will be the third consecutive year that China tops the world with the greatest number of shipments, according to government data.

Previous reports from the State Post Bureau have found that around 90% of China's package deliveries are handled by private couriers, who offer cheap home delivery, catering to the country's millions of online shoppers and merchants.

Authorities attribute the delivery explosion over the past year to the growing availability of courier services in villages and small towns. That has fostered the development of rural e-commerce, with more than 100 billion yuan ($14.4 billion) worth of farm products ordered from those areas by online shoppers in the first 10 months of this year.

About 3.7 billion parcels were shipped in November alone, making it the busiest delivery month in history, thanks to record spending during the Singles Day online shopping frenzy on Nov. 11. Delivery companies were overwhelmed during that period, having to deal with around 125 million packages daily.

The burgeoning courier business beat gross domestic product growth more than sixfold in the first three quarters of this year, as the breakneck pace of e-commerce spending contrasted sharply with far-slower expansion for traditional manufacturing and heavy industry.

However, the deluge of packages is also taking a toll on the nation's environment. The Post Bureau estimated that 30 million tons of carbon dioxide was emitted last year simply from manufacturing the tape used to pack parcels. Only half the cardboard waste from delivery boxes is recycled, while the lion's share of foam and plastic used in packages ends up in landfills.