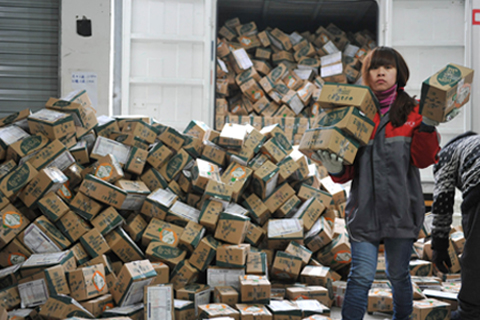 Workers sort out parcels at a delivery company in Hangzhou, Zhejiang province on Friday. The company saw three times more orders than on the same day last year. Photo: IC

China's version of the U.S.' Black Friday will result in 1 billion parcels traveling from retailers to customers' doorsteps over the course of the next few weeks, according to the China Express Association.

But the country recycles less than 20% of its packaging waste, Beijing Institute of Graphic Communication researcher Zhu Lei told Caixin. Only half the amount of all cardboard waste, the primary material in most delivery boxes, is recycled, while plastic foam and plastic are almost never processed.

China's waste recycling industry has grown at a snail's pace, while e-commerce has taken off in recent years due to cheap delivery services and changing purchasing habits among young tech-savvy consumers.

China's State Post Bureau calculated that retailers would have sent out a total of 30 billion delivery boxes over the course of this year. If each box weighs half a kilogram on average, this adds up to about 1.5 billion tons of cardboard, and most of it will end up in landfills.

A waste-sorting policy drafted in June by the National Development and Reform Commission (NDRC), the country's top economic planner, includes plans to introduce standards for collecting, sorting and recycling. An NDRC staffer told Caixin that the State Council, China's cabinet, will deliberate the policy in the coming weeks.

But a major sticking point in recycling is plastic tape used to seal delivery boxes. Tape jams up recycling machinery, said Tang Yanju, a branch secretary at the China National Resources Recycling Association, and is one of the main reasons for the low cardboard recycling rate.

In China, 17 billion meters of tape were used for packaging last year — enough to circle the equator about 425 times. In the process of manufacturing this much tape, 30 million tons of carbon dioxide were emitted, the State Post Bureau said.

Cardboard boxes that have lots of tape on them usually end up in a landfill or an incinerator because of a lack of manpower. "Nobody wants to spend hours picking tape off trash, just to earn a few fen more than they would earn delivering takeout," Tang said.

Recycling companies also tend to focus on materials like metals, which can fetch higher prices, instead of cardboard. But a third of all urban waste produced in China consists of packaging waste, the CEA said.

Cardboard is also overlooked by private garbage collectors because it fetches a lower price.

Employees of a recycling facility on Beijing's Third Ring Road told Caixin that they pay 0.6 to 0.8 yuan for every kilogram of newspapers brought in, but only 0.3 to 0.4 yuan for the same amount of cardboard.

China's Singles day originated in Chinese universities as a celebration of singlehood, inspired by the four 1s in the date shorthand — 11/11. Online retail giant Alibaba Retail Holding Ltd. turned it into a retail festival in 2009.