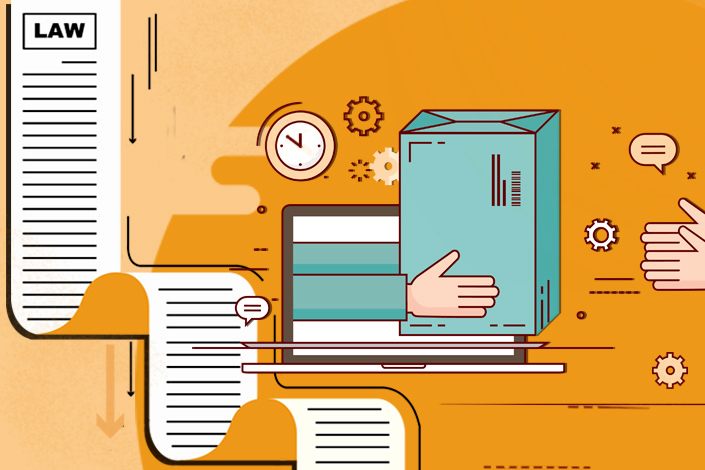 (Beijing) — A long-anticipated draft law aimed at better regulating the world's largest e-commerce market has been sent for review to top legislators, who will examine how it addresses issues like fake product reviews, information leaks and e-commerce taxes.

The draft e-commerce law, sent for closed-door review on Monday, has yet to be published. But it's expected to address a wide range of problems plaguing a sector that has largely lived in a gray zone since e-commerce first took off in China a decade ago.

Lawyers said the draft, which is already a year later than most expected it to be, will eventually become the wide-ranging China E-Commerce Law, which will probably be unveiled late next year after two revisions.

"This is the first law in China that will focus on e-commerce and a regulatory milestone," said Hu Yongquan, a professor of business administration in Hangzhou. "E-commerce will be given specific jurisdiction following years of unbridled boom."

Reports say the draft will tackle concerns that include fabricated product reviews, personal-information leaks, and e-commerce taxes that will level the playing field between traditional retail and online.

E-commerce has exploded in China over the last decade, partly due to the absence of a well-established network of traditional retailers as the country transitioned from a planned to a market economy. Annual online sales are now worth about 20 trillion yuan ($2.9 trillion), with annual growth rates of 30%, making China the world's largest market.

"The nation should put online and offline commercial activities on an equal footing and protect the safety of e-commerce transactions," said the Xinhua News Agency, one of several official state media that saw the draft.

Virtual-shop owners who coerce or threaten users into deleting negative ratings could be fined up to 500,000 yuan, according to media that saw the draft. The law would also be the first in China to punish "brushing," or the practice of merchants' recording false sales to boost their rankings in online marketplaces. It would also punish online merchants for whitewashing bad comments to boost their reputations online.

E-commerce businesses would need to register with local administrators, according to the draft, making it easier for consumers to acquire information about and report or sue a vendor in a dispute.

The registration process would also subject online merchants to sales taxes, a matter that's currently in a tax-free gray zone. "The business registration clause will meet a lot of resistance from the industry, as once these shops are registered as businesses, taxes will be inevitable," said intellectual-property lawyer Zhao Zhanling.

He added that e-commerce taxes are likely to be lower than those on traditional retailers, as the government won't want to stifle a fast-growing industry that has the potential to become a world leader.

"The underregulated frenzy in e-commerce development has brought on many negative effects," Hu said. "To some extent, the success of e-commerce has corroded the traditional economy. These laws will help balance the two. "