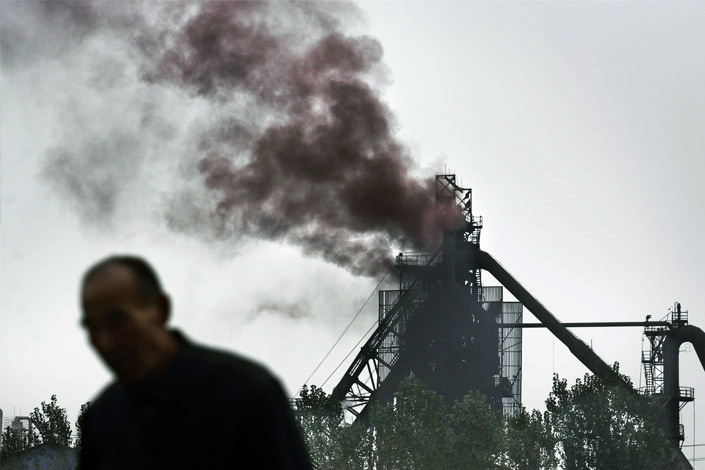 A villager works on his vegetable field on a late autumn day in 2014 in Handan, Hebei province. The steel plant nearly 100 meters behind him spews out brownish smoke when iron minerals are poured in a furnace. Photo: CFP

Lawmakers are also adding incentives, such as more specific tax breaks, to encourage polluters to reduce their emissions of toxic substances.

The Standing Committee of the National People’s Congress passed the Environmental Protection Law on Sunday, which aims to empower local governments to levy taxes on entities that produce air, water and solid pollutants, as well as noise.

Wang Jianfan, director of tax reform with the Ministry of Finance, told a press conference on Sunday that the pollution discharge fees introduced in 1979 had not been effective enough because of local government interference.

Pollution discharge fees, historically collected by local environmental protection bureaus, were often compromised due to their focus on economic growth in the past, according to media reports.

The new green tax will instead be collected by tax authorities, rather than by environmental authorities. This will beef up the authority of the collectors, and strengthen the polluters’ responsibility in reducing pollution discharge, said Wang.

Both are local entities, but the new levy is a formal tax, rather than a fee, and it will be collected by officials whose main job is tax collection.

The new law also adds more specific levels for polluters to pay less for their emissions. Under the current scheme, polluters can get a 50% cut in their discharge fees only when their emissions contain half as much pollution as permitted. Under the new law, polluters will receive one more tax-break incentive — a 25% tax cut if their pollution discharges are 30% of the amount allowed.

The authorities have been stepping up pollution discharge fees in recent years. In 2014, fees were doubled and local governments were allowed to raise standards according to local conditions.

The new law stipulates that local governments can collect no more than 10 times the national minimum.