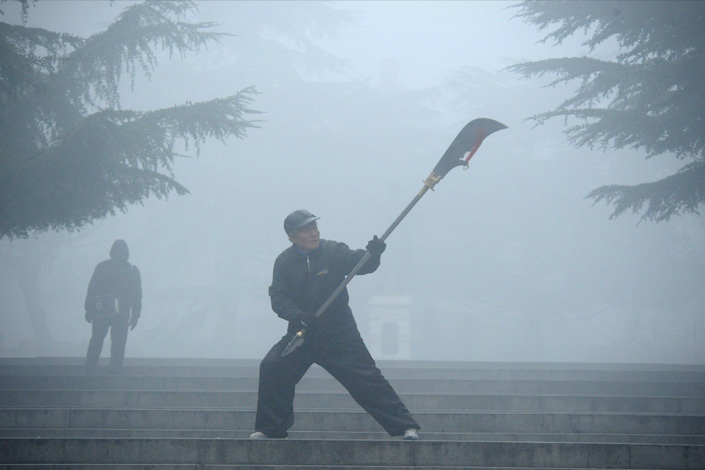 (Beijing) — Chinese lawmakers are considering more incentives to curb industrial emissions while half of northern China was enveloped in toxic smog on Tuesday.

The latest bout of serious smog that started to build up on Friday has spread to provinces and regions in northern, central and eastern parts of the country, according to the Ministry of Environmental Protection. The heavy air pollution will continue through late Wednesday, the ministry said.

At least eight northern cities, including Shijiazhuang and Handan in Hebei province and Anyang in the central province of Henan, recorded "off-the-scale" pollution with readings on the air quality index (AQI) above the maximum 500 mark, according to the ministry.

The AQI measures the level of pollutants in the air, especially the concentration of PM2.5 — fine cancer-causing particles smaller than 2.5 micrometers in diameter — as well as levels of PM10 pollutants and poisons such as sulfur dioxide. Any reading above 300 is considered "serious" by environmental authorities.

In Shijiazhuang, both PM2.5 and PM10 concentrations exceeded 1,000 micrograms per cubic meter of air at about 1 p.m. on Tuesday, according to official statistics.

Days with high levels of air pollution are more frequent in winter, as coal is burned to fuel citywide heating systems.

Authorities in Tianjin, a port city bordering Beijing and Hebei province, had canceled 80% of all flights scheduled for Monday by 5 p.m., according to local media reports. Major highways in the cities of Beijing and Tianjin and five provinces, including Hebei and Jiangsu, were temporarily closed in the early hours of Monday as visibility levels dropped.

Local governments in smog-affected areas have ordered factories to shut down and curbed traffic and construction work to ease the situation.

But manufacturers in several heavy industries ignored the call to cut or cease production. At least nine manufacturers, including a chemical firm in the city of Heze in Shandong province, had ignored official orders to suspend operations or were found to have emission levels that exceeded the allowed amounts during an inspection on Sunday.

One bioengineering firm in Heze had actually ratcheted up production after they received a suspension order, according to the ministry.

However, the ministry did not say how violators will be punished.

According to a new revision to a draft law on environmental protection taxes proposed by the ministry, companies required to pay a pollution tax would get a 25% tax deduction if their emission levels or waste disposal quantities fell to 30% below the industry average.

An earlier draft of the law had already offered businesses a 50% tax cut if their emission levels were half the industry average.

The country's top legislature, the National People's Congress, has been reviewing the draft law since Monday.

The change was made in accordance with proposals from policymakers, environmental protection officials and business leaders to offer more incentives to help curb pollution, said Li Fei, a deputy director of the Legal Committee of the top legislature.