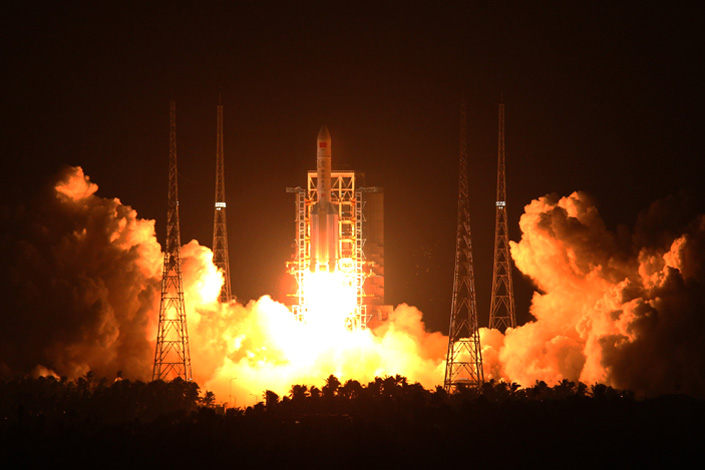 The Shijian-17 satellite, loaded with the HEP-100MF thruster, is launched by a Long March 5 rocket in the Wenchang Satellite Launch Center in Hainan province on Nov. 3. Photo: Xinhua

A unique thruster mounted on a recently launched satellite has given China's space program an edge over international rivals and opened a door to deep-space exploration.

The HEP-100MF thruster, jointly developed by research teams from the Harbin Institute of Technology (H.I.T.) and the China Academy of Space Technology's (CAST) Institute 502, successfully debuted Nov. 22 aboard an orbiting Shijian-17 satellite. The satellite was launched Nov. 3 by a Long March 5 rocket.

"The thruster ignited successfully in geosynchronous orbit," the H.I.T. announced. The ignition "marks the first application of magnetic-focus (HEP-100MF) in space.

The HEP-100MF propulsion system relies on a magnetic field to convert and control the propellant — a plume of charged ion particles — that generates the thrust needed at times to stabilize the orbiting Shijian-17.

A system that relies on magnetic-focus, ion plume propulsion is less likely to damage a thruster's mechanism than other propulsion systems, scientists say. It's also considered more efficient than traditional chemical-propulsion thrusters.

Chemical fuel propelled the powerful Saturn V rockets that helped the U.S. space program put men on the moon from 1969-72. But the Saturn V's first-stage engines burned out in less than three minutes, scientists say, and most of the rocket's fuel was used to propel its own weight.

Chemical propulsion systems have been commonly deployed for years to stabilize communications satellites, which require constant adjusting while in orbit. Sooner or later, though, these thrusters run out of fuel.

The HEP-100MF might be used for deep-space missions because it's designed for longevity. The thruster "can be applied to space station, deep space exploration (and) high- and low-orbit Earth satellite orbit control," the H.I.T. said.

China has not announced plans for a deep-space mission, but the nation's space program has been expanding rapidly. Recent developments include new rockets and the launching of a manned space station.

The HEP-100MF is based on so-called "Hall-effect thruster" technology, which has been tested on the ground by researchers at American, Russian, European Union and Japanese space agencies.

But China's thruster aboard the Shijian-17, which the official Xinhua News Agency said was built to "verify new technology," was the first to be successfully tested in space. It's also dramatically unlike propulsion systems of the past.

After the engines on a Saturn V rocket burned out, the rocket's payload went into "space glide" mode, using inertia and gravity's pull to hurdle toward a destination. But additional thrust is needed to propel a gliding spacecraft beyond the solar system and into deep space.

Scientists have been working for years to develop long-lasting, deep-space-capable alternatives to chemical propulsion. Research into electric propulsion, for example, was under way in the United States and the Soviet Union even while the first Apollo missions were putting men on the moon more than 40 years ago.

U.S. researchers led by scientist Harold Kaufman of the National Aeronautics and Space Administration (NASA) worked on electron bombardment thrusters, which are now called Kaufman thrusters. Soviet researchers, guided by A. I. Morozov of the Kurchatov Institute, focused on the Hall-effect thruster technology.

The first Kaufmann thruster for a deep-space mission kicked into action aboard NASA's Deep Space 1 spacecraft in 1998. It delivered a relatively small amount of thrust — roughly equivalent to the amount of gravity-induced pressure that keeps a single sheet of paper lying flat on a table. But in space, that was enough thrust to accelerate the spacecraft by up to 32 km per day.

Moreover, the Kaufmann thruster managed to operate for more than 14,000 hours — a longer lifespan than all of the world's chemical propulsion engines ever built put together.

Hall-effect thrusters have been used to propel more than 238 communications satellites since 1971. But researchers have been unable to overcome the system's shortcomings, such as its relatively short lifespan and the fact that its ion plume can damage the thruster mechanism.

Chinese space scientists considered but then abandoned the idea of using electric thrusters for satellites in the 1980s. But then researchers, led by H.I.T. scientist Yu Daren, a child prodigy who joined the institute at age 15, built on the success of the Hall-effect thruster to develop the HEP-100MF.

The H.I.T.'s work began in the 1990s, Yu told Caixin in a recent interview, after the Russians could hail the success of their Hall-effect thruster technology and after commercial satellites in the United States started using a so-called ion thruster in 1997.

A wave of Chinese researchers that included Yu initially tried to replicate Mozorov's findings in their own labs. Eventually, they decided to go beyond the Russians by using magnetism to confine the thruster's damaging plume.

Mozorov's team had developed a rudimentary magnetic-focus system. But when Yu's team visited Mozorov in Moscow, they found the Russian technology as unreliable as their own.

"The father of the Hall-effect thruster had the same problem: inconsistent performance," Yu told Caixin. "But my team realized that, if it's possible to control the ion jet for even one instant, there's a possibility that we can extend this control, and focus the jet consistently."

Interest has grown gradually. Only 20 people attended China's first National Electric Propulsion Conference at HIT in 2005. But 150 scientific papers were submitted to the annual conference in 2016.

In October 2012, China space-tested one Shijian-series satellite with a Kaufman thruster and another with a Hall-effect thruster. Each thruster's experiment lasted seven minutes.

"Forty years of work went into those seven minutes," said Zhang Weiwen, director of the CAST Institute 510, whose scientists developed the thrusters.

In 2015, China Aerospace Science and Technology Corp. Institute 801 researchers announced a breakthrough in Hall-effect technology. They said they had developed a thruster with a lifespan of 75,000 hours that could ignite 15,000 times and burn 18,000 hours without a break.

The following year, Yu's team and CAST Institute 502 researchers said they had developed a Hall-effect thruster that would improve on its predecessor by up to 30 percent, the thruster's chief designer Mao Wei told the South China Morning Post. They called it the HEP-100MF.

The November experiment, which was the first flight test for the HEP-100MF, has fueled confidence in China's propulsion technology and the space program's ability to rocket into deep space.

"The technology for deep-space exploration already exists," Yu said. "All we need now is a go-ahead from the government."