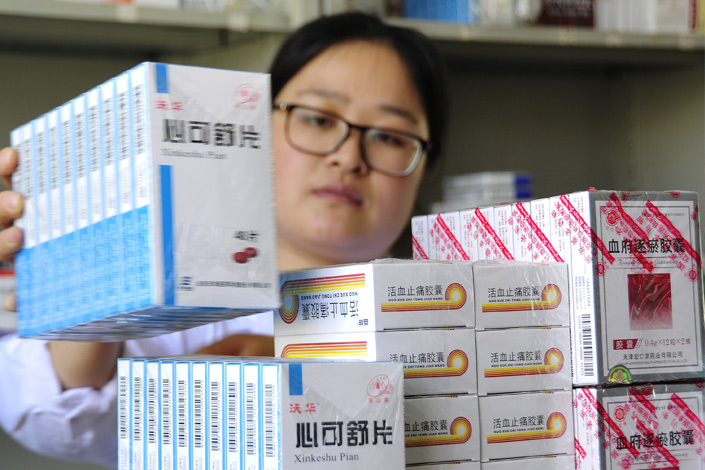 In one case, an agent offered to pay a doctor at a top hospital in Shanghai 45 yuan ($6.50) per box of allergy medicine prescribed, according to the CCTV report, which aired Saturday. Patients had to pay 129 yuan for the small box of tablets at the pharmacy at the hospital. In another case, a sales representative told a doctor in Shanghai that he would receive 1,800 yuan for prescribing 150 boxes of a certain tablet that month.

One Shanghai doctor was caught on camera while receiving four cash envelopes from different sales representatives within three minutes, according to the eight-month-long investigation. The doctor is seen telling one salesperson that he could help the latter make enough money to buy a new iPhone in a month.

CCTV stopped short of naming the hospitals or doctors implicated in the scandal.

The government-run medical insurance program offers reimbursements only for drugs purchased directly from public hospitals, creating a monopoly that has pushed up prices and led to corruption.

The doctors usually pocketed 30% to 40% of the retail price patients paid for a prescription drug bought from a public hospital, while medical salespeople received a 10% commission on every item sold, several sales representatives told CCTV.

The government medical insurance program should be expanded to offer reimbursements for drugs bought at private pharmacies to bring an end to the kickback system, a pharmaceutical company executive on the southern island of Hainan told the Guangzhou Daily.

The Shanghai Municipal Commission of Health and Family Planning said it has launched an investigation and a six-month campaign to stamp out corruption among doctors. Authorities in Hunan also pledged to improve supervision of pharmaceutical sales.

China's health care system is blighted by crowded hospitals, corruption and tensions between patients and medical staff. Doctors have long complained that their salaries are too low, and that the government was encouraging them to set up private clinics to supplement their income as part of the latest health care reform.

The reform also includes banning hospitals from using drug sales to shore up profits as of Nov. 8 and instead allowing them to charge more for premium services. Cash-strapped hospitals had earlier put a markup on drugs they sold, which, together with kickbacks for doctors, had pushed up the price of medications.

Last year, drug-related expenses accounted for nearly half of all medical expenditure for outpatients, and over a third for those hospitalized in China, according to data from the National Health and Family Planning Commission.