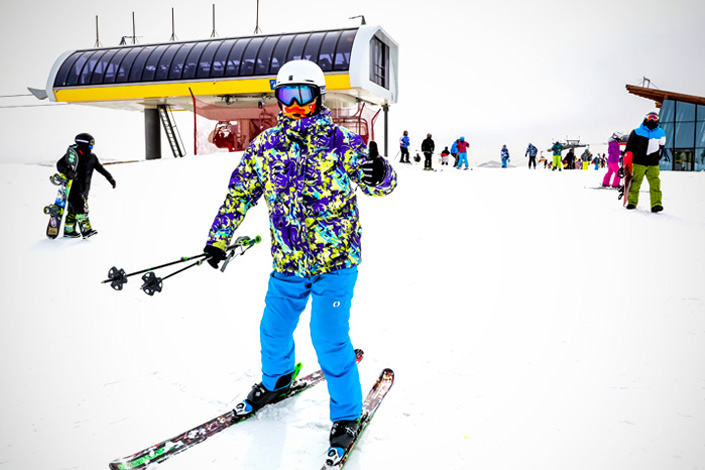 Vacationers enjoy skiing in Zhangjiakou, Hebei province, on March 6. Some skiing events of the 2022 Winter Olympics will be held in Zhangjiakou, which has boosted the popularity of this city's winter-sports areas. Photo: IC

(Beijing) — As China looks for new engines of growth in a slowing economy, it has set its sights on what it calls “sports tourism,” hoping to generate billions more dollars from ski slopes, soccer competitions, biking trails and even yacht clubs.

In a document issued last week, the country rolled out specific targets for sports tourism, which Beijing defines as events and facilities where people watch or participate in sporting events or activities.

By 2020, the country wants to generate a total 1 billion domestic and foreign “tourist visits” annually by forming 100 large companies focused on the sector. The companies in turn would create 100 new sporting events; 100 “health-promoting” facilities, such as hiking, jogging and biking trails; and 100 undefined “demonstration tourist bases.”

The new goals were in a document jointly issued by the China National Tourism Administration and the General Administration of Sports of China. They come on the heels of a string of guidelines announced last month by the State Council, China’s cabinet, which even set detailed targets for mountain climbing, water skiing and skydiving.

The targets — at times quite specific — include building 2,000 camps for air sports activities such as skydiving and ballooning; 1,000 water sports clubs; and 500 km of hiking trails along the Taihang Mountains by 2020. The goal is to make mountain-outdoor sports a 400 billion yuan industry, with water sports at 300 billion and air sports at 200 billion.

Sports tourism has been the fastest growing segment in China’s economy, largely due to rising affluence and health consciousness, according to a Citi Research report released in October.

There’s also been a shift in the nature of consumer spending, away from what has come to be called “emulative spending,” often characterized by the desire to outdo one’s neighbors in consumption.

“Chinese residents have moved from waves of emulative spending to more individualized, diverse and high-quality consumption” in sectors as diverse as tourism, sports and health care, said Cong Liang, the director of the national economy department of the NDRC, China’s top economic planning body, in November.

Most of China’s domestic sports tourists are people in their 30s and 40s, and 80% of them are men, according to a 2016 report by Lvmama.com, one of the largest travel platforms in China. The most active participants are in the cities of Shanghai, Guangzhou, Beijing, Nanjing, Hangzhou and Dalian.

CIConsulting predicts an annual growth of 30% to 40% for China’s sports tourism market, much higher than its forecast of the global increase in this sector at 14%. Much of its confidence comes from detailed favorable policies from the Chinese government.

And a big component of that is expected to be skiing, one of China’s priorities due to the country’s upcoming hosting of the 2022 Winter Olympics.

Beijing’s goal is to get 300 million people to participate in ice and snow sports by building 1,450 skating rinks and ski areas and generating a projected 600 billion yuan by 2022.

Offering free skiing days in dozens of ski resorts in snow-rich Jilin province is part of the promotion plan.

Beidahu Ski Resort is one of the largest Chinese ski resorts and is in Jilin City, in Jilin province. Zhang Wenzhuo, the company’s sales manager said the resort has been ordered by the government to provide free admission two or three days every month. Every visitor on that day can have free access to a complete set of ski gear, three hours to ski, two hours of sledding, and a cable car ride to a scenic spot on the top of the mountain.

Currently, 2,000 to 3,000 foreign travelers spend their vacations in Beidahu every year, but Zhang is expecting more growth after a government document predicted 150 million overseas visitors by 2020.

It’s all part of China’s effort to shift its economy more toward consumption and services instead of exports and investment. Consumer spending accounted for 52.8% of China’s gross domestic product for the first three quarters of 2016.