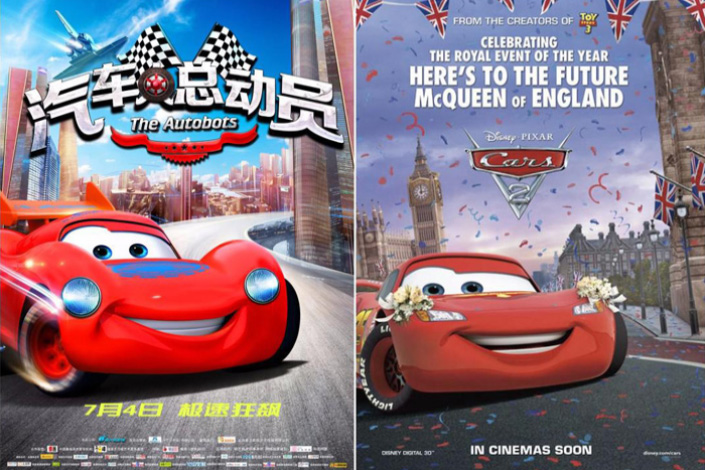 A Shanghai court has ruled that a poster for the Chinese-made animated movie The Autobots (left) misleads moviegoers into believing that the movie is part of the Cars franchise, created by Pixar Animation Studios, a division of The Walt Disney Company.

(Beijing) — A Chinese animation company and film distributer have been ordered by a Shanghai court to pay 1.35 million yuan ($194,000) to The Walt Disney Co. and Pixar Animation Studios for plagiarizing two characters from the Cars animated-film franchise and manipulating the local production’s title to make it appear as if the movie was part of the series.

Blue MTV, an animation studio in Fujian province, and Beijing film distributor G-Point Film Culture Media Co. Ltd. infringed upon the intellectual property rights of Disney in the production of the 2015 animated movie The Autobots, according to court documents released Thursday by the Pudong New Area People’s Court.

Two characters in the Chinese animation film bore a striking resemblance to the lead characters from the Pixar films, according to the verdict.

“It’s a typical case of copyright infringement and unfair competition. The defendants have eventually paid the price for that,” presiding Judge Shao Yun said.

The penalty covers both compensation and legal fees, but was less than half the sum demanded by Disney when it took the two Chinese firms to court in July 2015.

The two Chinese companies also deliberately manipulated their poster for The Autobots to make its Chinese title appear similar to that of the Chinese title of Cars, and this constituted unfair competition, the court said.

The Chinese titles for the movies are very similar, with the local production’s being Mobilization of Autobots, while the Disney film’s was Mobilization of Race Cars. One crucial Chinese character that differentiates the words Autobots and Race Cars was hidden behind an image of a wheel, a comparison of the two movie posters showed.

The two defendants denied the accusations, saying that they developed the characters in The Autobots and designed its poster “independently,” according to court document.

The defendants did not try to promote the Chinese animation film as an installment of franchise of Cars and instead have emphasized it as a Chinese film, both Blue MTV and G-Point Film said.