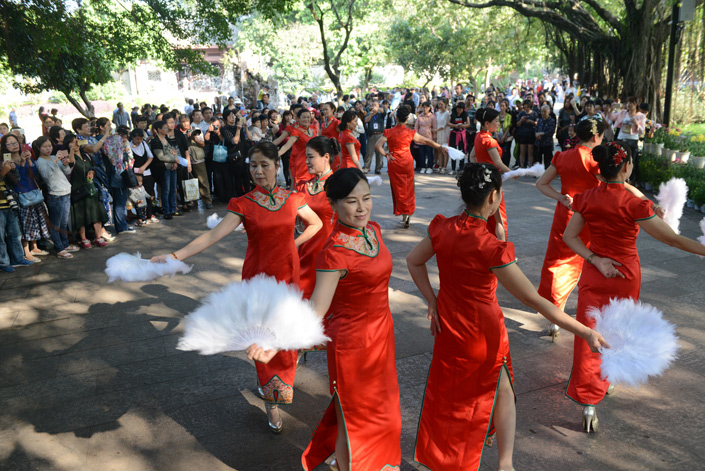 Retired women wearing traditional qipao, or cheongsams, put on a dance show at a park in Fuzhou, Fujian province, on Nov. 17. Photo: IC

(Beijing) — Only 30% of respondents supported a government plan to postpone the age of retirement, which will delay access by workers to pension payouts, according to a survey released Thursday by a government-backed think tank, the Chinese Academy of Social Sciences.

The 2016 survey, which sampled 24,000 people in 38 Chinese cities, showed that 39% of respondents opposed the plan. Another 31% said they were not sure, while the remainder said they had not yet formulated an opinion.

Concerns over rising competition in the job market were the main reason for people’s opposition to the plan, canvassers said.

Many disapproved of the plan over concerns that they might not be able to live long enough to fully benefit from the pension program they contributed to for many years.

The think tank said that policymakers must fully take into account the physical and financial challenges different social groups might face in retirement to win over more support from the public.

As the country's population is rapidly aging, the ruling Communist Party has sought to change retirement age policies to prevent pension funds from drying up since early 2015.

Minister of Human Resources and Labor Yin Weimin said in March 2015 that new retirement age policies would be rolled out in 2017, but would not be implemented until 2022.

Both private sector workers and government employees are required to postpone their retirement by a few months each year from 2022 from the current 60 years for men and 50 years for women.

Eventually, male workers will have to wait until the age of 65, and female workers until they turn 60 to retire and to gain access to pension payments.

Academics in favor of the plan said that authorities have no other choice but to make the changes because many pension funds, particularly those in some impoverished regions such as Heilongjiang in China’s northeastern rust belt, are increasingly drying up.

Heilongjiang only has enough money to cover pension payments for one month, compared with several months three years ago, according to the 2015 China Social Security Development Report compiled by the Ministry of Human Resources and Social Security.

The pension program in China is further overstretched because pensioners who have retired early and made little or no contribution to the two-decade old pension scheme are paid out of the government-run pension fund.

Some academics are calling on the central authorities to use some of the proceeds from state-owned companies to top up such pension funds, arguing that it is the fault of the government for not having introduced a pension plan for early retirees.

Others are urging policymakers to unite separate pension schemes currently under provincial or city governments into a national system, allowing rich provinces such as Guangdong in the south to help other regions.