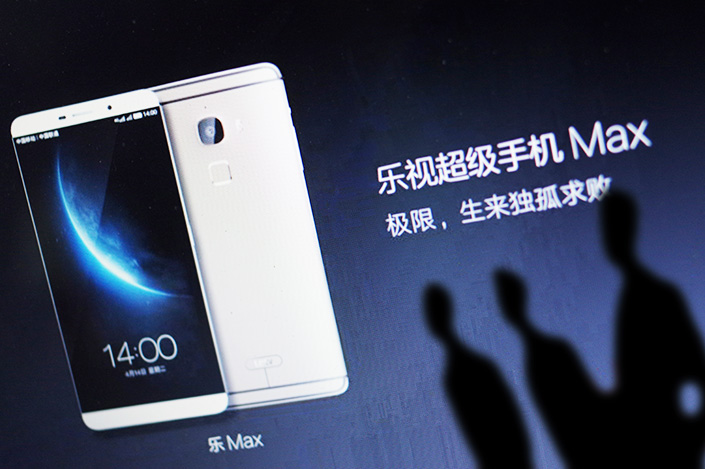 LeEco Le Max Superphones are displayed on a screen during a product-release conference in Beijing in April 2015. One of the company’s suppliers, a smartphone-component maker, has filed for arbitration against LeEco over unpaid bills, marking the first legal action by a supplier against the cash-strapped company. Photo: IC

(Beijing) — A smartphone-component maker has become the first company to take legal action in an effort to collect unpaid bills from cash-strapped LeEco, setting the stage for a potential run on LeEco by other worried creditors.

Haosheng Electronic Technology Co. Ltd. said it is seeking arbitration from a trade court to recover 51.74 million yuan ($7.49 million) it is owed. LeEco, which began as a video streaming site, has been hard-pressed for cash after splurging billions of yuan on breakneck expansion into areas such as smartphones, electric cars and movie making.

The Shanghai International Economy and Trade Arbitration Commission, a court that handles commercial disputes, has accepted the case from Haosheng, a manufacturer of phone-speaker parts in east China’s Zhejiang province.

LeEco’s cellphone business is severely short on liquidity, and production is not on schedule, sources within the company told Caixin.

“Should LeEco be unable to raise funds to pay back suppliers, Haosheng will be the first of many to follow. If a liquidity crisis turns into a crisis of confidence, that is when real trouble will begin,” one source said.

Haosheng filed for arbitration after LeEco failed to carry out a payment plan devised by the two companies in November. According to that agreement, LeEco would pay back its debt plus 6% interest in nine installments. The agreement said that should LeEco miss any of the deadlines, the outstanding amount would become instantly due. LeEco failed to fulfill its commitment with the first payment due last month.

LeEco owed Haosheng 29 million yuan in the first six months of last year, which was 20% of Haosheng’s total receivables. Later in the year, the component maker continued to supply parts to LeEco, and its receivables grew to over 50 million yuan, a huge burden on a company with annual revenue of just 300 million yuan.

LeEco’s financial problems began to surface in November, when Chairman Jia Yueting confessed that the company was facing a cash crunch brought on by imprudent spending and overly ambitions forays. Worst-hit was the company’s cellphone business, which has run up debts to hundreds of suppliers.

Compal Electronics, a Taiwanese contract manufacturer, revealed in November that the size of LeEco’s debt was $260 million, while Truly International Holdings, a display supplier listed in Hong Kong, told Caixin that LeEco owes it a much smaller amount. Neither has announced legal action to recover the funds. A Hong Kong newspaper has sued LeEco for $69,000 for unpaid advertising fees.

One of LeEco’s many new commitments that brought on the cash crunch has been its move into new-energy smart cars. The company showcased a prototype model, the FF91, with partner Faraday Future, at a major trade show this week. The vehicle got generally positive reviews.

Though the FF91 has finally given LeEco’s smart-car ambitions some much-needed recognition, the new cars won’t be ready for mass production until 2018 at the earliest, and possibly much later.

Faraday Future said it received over 64,000 reservations for its vehicle within 36 hours of taking orders on its website. However, not all of these were booked with the 50,000 yuan deposit required for priority reservations, the company said in an emailed response to a reporter’s question.