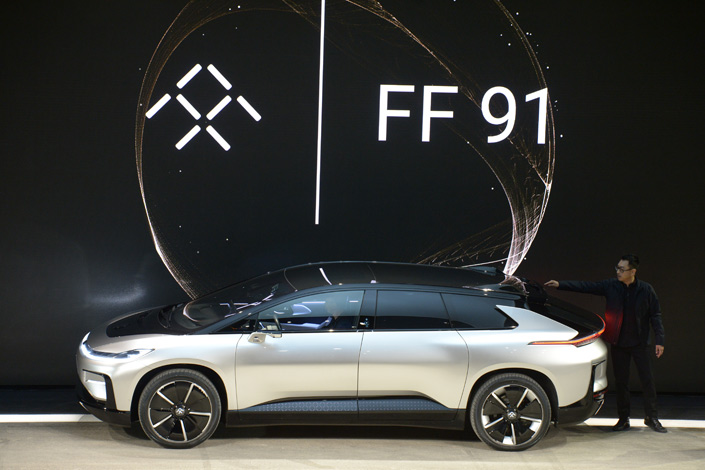 (Beijing) —The futuristic LeEco-backed FF91 looks set to pump confidence into the car-making business of the Chinese tech giant, which has lately been running low on cash and investor morale.

The vehicle unveiled in Las Vegas on Wednesday is created by Faraday Futures, a Silicon Valley startup, which LeEco Chairman Jia Yueting personally bankrolled with a $300 million investment. Jia holds a minority stake in the new-energy carmaker, a LeEco spokesperson said.

The Chinese tech company has been troubled by liquidity woes following excessive spending on the development of its own supercar, the LeSee, Jia had admitted in an internal letter. This drew speculation that LeEco’s car-making ambitions would have trouble materializing.

The delivery of this vehicle may sway doubters.

“The road to car-making for LeEco has been bumpy, to say the least,” said Xin Haiguang, an influential tech blogger who was present at the launch prior to the Consumer Electronics Show.

“At least there were no noticeable glitches, and the technology seemed pretty mature. This helps convince skeptics that the company might be going somewhere with this ambition.”

Jia appeared at the launch as an investor, congratulating the achievements of the “disruptive machine,” and alluding to his own unfulfilled car-making aspirations.

“Here we are, with our first production vehicle,” Jia said. “This is a milestone on our journey to the electric ecosystem era. We believe an easy road will never lead to greatness.”

LeEco was embarrassed by the absence of its own self-driving vehicle, which was set to showcase at a U.S. launch event in October. Jia had to walk down the runway in person instead of being driven by the autonomous vehicle. LeSee is still a prototype despite the vast amounts of capital it has diverted from other LeEco businesses.

The FF91, the price of which has yet to be revealed, can be reserved on the Faraday Futures website on payment of a 50,000 yuan ($7,190) deposit. But mass production of the vehicles will not begin until 2018.

Faraday Futures’ plant in North Las Vegas in the U.S. state of Nevada remains a 3-million-square-foot plot of land in the desert after construction stalled in November after the company failed to meet multiple payment deadlines to builders. This was linked to news of LeEco’s cash crunch, which came out earlier that month.

Nevada State Treasurer Dan Schwartz voiced concerns over the validity of the project, calling attention to a “potentially massive financial fraud” and said it resembled a “Ponzi scheme, with money passed from one LeEco company to the next to ward off investor angst.”

Though this new vehicle may serve as evidence that LeEco and Faraday Futures are not merely drumming up hype for financial manipulation purposes, analysts worry that the vehicle has much to prove.

“There are some impressive features, and overall people are thinking, ‘not bad,’ but we think this looks like a million-yuan car. It needs to show that it is really that different and innovative,” Xin said.