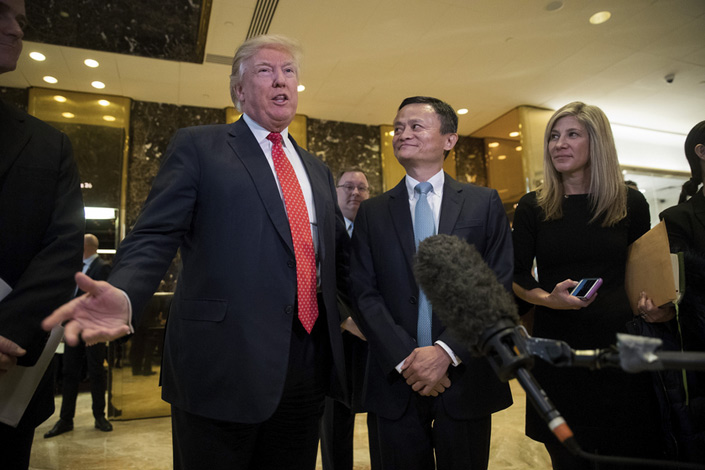 At the same time, they said Ma’s Monday audience with Trump in New York City could help Alibaba Group Holding Ltd. gain a better footing for cross-border e-commerce, although it was unclear if Alibaba’s reputation among U.S. brands might improve for fighting piracy in its online marketplaces.

The Chinese billionaire promised to create 1 million jobs in the U.S. Midwest over five years by helping small businesses sell farm produce and garments to China and Southeast Asia through Alibaba’s e-commerce platforms.

Ma met with Trump at the Trump Tower for 40 minutes in one of a broader series of meetings with business leaders, becoming one of the first major Chinese businesspeople to have an audience with the incoming U.S. president.

“I think the door is open, and we can discuss relationships and trade issues,” Ma said after the session. “The president-elect is very open and listens, I have told him my ideas of how he can support trade, especially small businesses.”

Trump told reporters after the meeting that he and Ma will “do some great things.”

Though Ma’s plan sounds good in theory, the number of jobs he hopes to create shouldn’t be taken seriously, said analysts, who believe the meeting was aimed at creating a more cordial climate with Trump, who will be inaugurated on Jan. 20.

“Jack Ma is using jobs as a bargaining chip in exchange for better treatment and favorable polices in the U.S.,” said Zhang Zhouping, chief analyst at the China E-commerce Association. “However, 1 million seems to be an exaggerated number if he’s just talking about small mom-and-pop businesses in the nation’s Midwest. It will probably take a lot more time.”

Alibaba’s image in the U.S. has been hurt due to trafficking in knockoff goods. Last month its Taobao flea-market platform was labeled a “notorious market” for piracy by the U.S. Trade Representative (USTR), which cited “unacceptably high levels of counterfeit and pirated goods which are difficult to root out.”

Though a cozier relationship with Trump may have some sway in removing Alibaba’s name from the USTR’s list, there will still be pressure from U.S. manufacturers and brands that are victims of counterfeiting to keep Alibaba on the list, Zhang said.