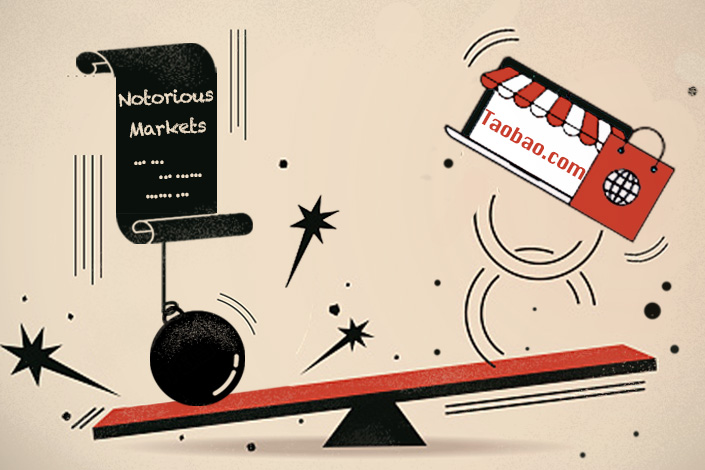 (Beijing) — Alibaba's Taobao has been named a "notorious market" by a Washington government agency because of the online marketplace's alleged involvement in the trade of pirated goods.

Taobao's inclusion on the annual "notorious" list, released by the United States Trade Representative (USTR) office on Wednesday, marks a setback for the e-commerce giant, which had been removed from the list four years ago.

Taobao, one of Alibaba Group Holding Ltd.'s largest marketplaces, which specializes in consumer-to-consumer trade similar to eBay, was one of 21 online marketplaces on the list.

"The Taobao.com e-commerce platform is an important concern due to the large volume of allegedly counterfeit and pirated goods available and the challenges right holders experience in removing and preventing illicit sales and offers of such goods," the USTR wrote in its report.

It added that brand owners in the U.S. and worldwide continue to complain about the high level of trafficking in pirated goods on Taobao, which is one of the world's 15 most popular websites, and among the top five in China.

Alibaba's U.S.-listed shares were relatively unaffected after the report came out. The stock was down 0.7% in after-hours trading on Wednesday in New York, extending a similar 0.7% decline during the regular trading session.

The USTR report acknowledged that Alibaba has taken steps to tackle the problem, but added: "While recent steps set positive expectations for the future, current levels of reported counterfeiting and piracy are unacceptably high."

China is the world's largest e-commerce market, and Alibaba is the undisputed leader in the space. While piracy is relatively controllable on business-to-consumer (B2C) marketplaces, in which large retailers sell merchandise to consumers, it's far more difficult to control in C2C platforms, populated by thousands or even millions of small merchants. That reality was a major factor leading Alibaba's chief rival, JD.com, to shutter its much-smaller C2C marketplace a year ago.

Taobao had made regular appearances on the "notorious markets" list in the past, but marked a major milestone when its name was removed in the 2012 edition four years ago. Other major Chinese internet firms, including online search leader Baidu Inc. and portal operator Sohu Inc., also were included on earlier "notorious" lists but later had their names removed after dealing with piracy issues.

Alibaba said it was "disappointed" at its reinclusion on the latest list, and pointed to some of the recent steps it has taken to address piracy on Taobao. It also noted the huge number of merchants using its marketplaces, putting the total at 10 million.

"We question whether the USTR acted based on the actual facts or was influenced by the current political climate," the company said, without elaborating.

One of Alibaba's most vocal critics has been the American Apparel & Footwear Association (AAFA). Alibaba also made headlines earlier this year when several luxury brands, including Tiffany & Co. and Gucci, withdrew from the International Anti-Counterfeiting Coalition after the group accepted Alibaba as a member. The controversy later prompted the coalition to rescind Alibaba's membership.

"Today's action shines a renewed spotlight on the considerable concerns we and others continue to see on Alibaba platforms," AAFA President Rick Helfenbein said. "In the coming year, we will work with our members, USTR and other government agencies, outside stakeholders, and Alibaba itself to seek sustained improvements that lead to the permanent removal of counterfeits from these online platforms."