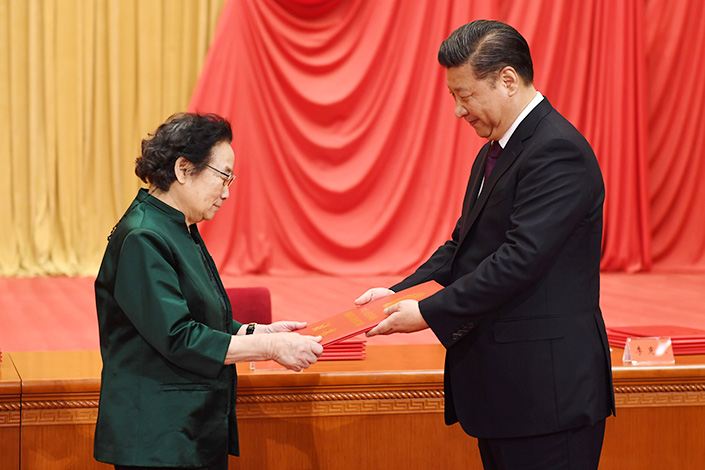 Tu Youyou, winner of the 2015 Nobel Prize in physiology or medicine, receives her 2016 national Science & Technology Award from President Xi Jinping on Monday in the Great Hall of the People in Beijing. Photo: Li Xueren / Xinhua News Agency

Nearly 45 years after the discovery that got her the Nobel Prize in physiology or medicine in 2015, pharmacologist Tu Youyou has finally received some official recognition at home, winning China’s top government science award on Monday.

But she has received little recognition for her achievements in her home country — she does not have a doctoral degree and is not a member of the prestigious Chinese Academy of Sciences.

At a ceremony in Beijing, the 86-year-old was finally given the National Supreme Science and Technology Award, which comes with a cash prize of 5 million yuan ($723,000).

The discovery of artemisinin has won government accolade twice in China, in 1978 and 1987, but it was a “collective honor” given to everyone involved in Project 532, a research program established in 1967 to fight malaria in what was then North Vietnam and in southern China. It involved 500 researchers from 60 institutes around the country, including Tu.

However, Tu’s crucial role in this project has long been disputed by her peers and even national science award committees. Some analysts say she was overlooked because she is not a member of the top government-backed research institute. When she won a relatively low-level domestic science award in 1992, another researcher, Wu Yulin, even filed a complaint against her, but authorities eventually ruled in favor of Tu.

She was left in relative anonymity until 2011, when two researchers at the U.S. National Institutes of Health, Louis Miller and Su Xinzhuan, looked into the history of artemisinin research and identified Tu as the main contributor to the drug's discovery.

The following year, Tu’s name appeared in the nomination list for China’s top government science award, but she didn’t win. Many scholars, including Peking University’s Rao, believe it was because a fellow researcher with a chip on his shoulder was on the award investigation team.

In 2015, the Nobel Committee acknowledged when giving her the top international recognition that Tu played a decisive role in the research by using ether to extract active ingredients from plants. But Tu failed to win China’s top accolade the same year.

Government’s failure to recognize Tu in 2015 further exposed flaws in how China chooses its top award winners, said Zhou Cheng, a professor at the Center for Social Studies of Science at Peking University.

A number of selected major institutions must recommend the nominees for the award. In 2015, the government demanded that priority should be given to researchers who were still working on the field, reducing the chances for retired scholars such as Tu to get selected.