By Lin Jinbing and Yang Ge 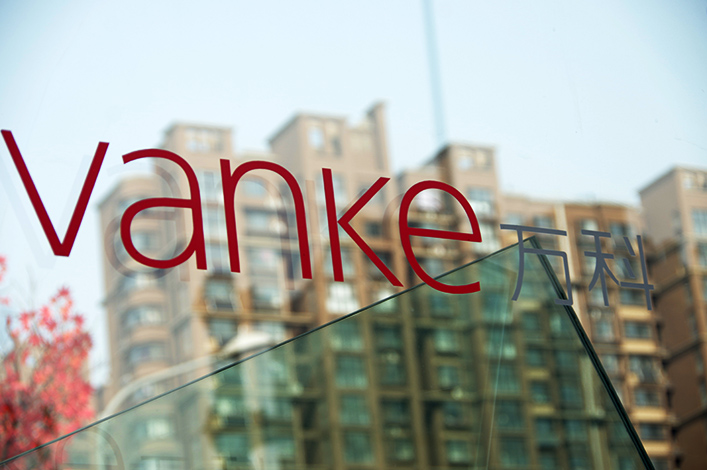 The Vanke company logo is pictured at a residential compound in Jinan, Shangdong province, in February. China Evergrande Group reportedly will sell its stake in Vanke. The conglomerate China Resources announced on Thursday it will sell its own stake in the real estate developer. Photo:Visual China

(Beijing) — A hostile takeover bid that has riveted China for more than a year could be moving closer to resolution, as two major players signaled their intent to withdraw from the contest under probable government pressure.

The battle for control of real estate developer China Vanke Co. took an unexpected turn on Thursday when one of its major stakeholders, conglomerate China Resources, said it will sell its shares. The buyer was the subway authority in Vanke’s hometown of Shenzhen, which had mounted a previous white-knight bid to rescue Vanke from hostile suitor Baoneng Group.

At nearly the same time, knowledgeable sources told Caixin on Thursday that one of Vanke’s other major stakeholders, rival real estate developer China Evergrande Group, also wanted to sell its shares to the Shenzhen subway operator. Evergrande also said it had no intention of increasing its Vanke stake, and that it wanted to act in accordance with the Shenzhen government’s wishes, according to a report submitted to the city on Dec. 17.

China Resources and Evergrande hold 15.3% and 14.1% of Vanke’s shares respectively. That means both sales could give nearly 30% of Vanke to Shenzhen Metro Group Co., operator of the subway system in the southern Chinese boomtown across the border from Hong Kong. That would exceed the 25.4% now held by hostile suitor Baoneng.

In response to the latest developments, two sources close to Baoneng told Caixin the company will continue to hold its Vanke stake on a principle of “protecting the economic interests and not harming” the company.

The twists come in a story that has unfolded over more than a year, and has dragged in numerous government agencies due to the unprecedented nature of the takeover bid in China’s young stock markets. Those markets, based in Shanghai and Shenzhen, are less than three decades old, and were traditionally dominated by docile, state-run enterprises that took their orders from government entities.

But as the market has evolved, more private companies like Baoneng, Evergrande and Vanke have emerged, leading to the kind of hostile takeover bids and other share-based strong-arm tactics that were rarely seen in the past.

Sources told Caixin that the State-Owned Assets Supervision and Administration Commission (SASAC), the body that regulates big state-owned companies, was also critical of the role of China Resources, a longtime Vanke investor that had no intentions in the hostile bidding. That criticism and accompanying pressure may have ultimately led to China Resources’ latest decision to sell its stake, they added.

“Many government agencies have been involved in this episode so far. From the financial regulator standpoint, they want to make sure the source of capital for pursuing Vanke is legitimate and that their use for this kind of corporate control endeavors is justified,” said Edward Tse, a corporate strategy adviser at Gao Feng Advisory.

“The governments’ objectives are not only commercially oriented but also social. … In this case, the long drawn-out process has raised questions and caused concerns, and so the government’s stepping in would help stabilize the situation.”

The tale began more than a year ago, when longtime stakeholder Baoneng quietly began boosting its Vanke stake by buying shares in the open market. Vanke refused to play along when it became apparent a hostile takeover attempt might be underway. It found a white-knight suitor in Shenzhen Metro, which offered to sell Vanke valuable subway-adjacent land in exchange for 21% of Vanke’s shares.

But China Resources and Baoneng opposed the deal. As a result, Vanke formally withdrew the plan last month after failing to meet a deadline. Evergrande started buying Vanke shares in the open market last year, though it never formally explained its rationale for the move.

Caixin reported in November that the Shenzhen government had approached Evergrande and proposed a deal that would see the latter withdraw from the bidding process for Vanke. In exchange, Evergrande, which is already a Hong Kong-listed company, would be allowed to make a second listing on the Shenzhen stock exchange using an existing shell company, a process often called a “backdoor listing.”

Such listings have become a preferred route to market for companies in China due to a big backlog from companies seeking to make traditional IPOs. Earlier this month, Evergrande submitted a filing to the Hong Kong stock exchange indicating the Shenzhen backdoor listing plan was moving ahead.