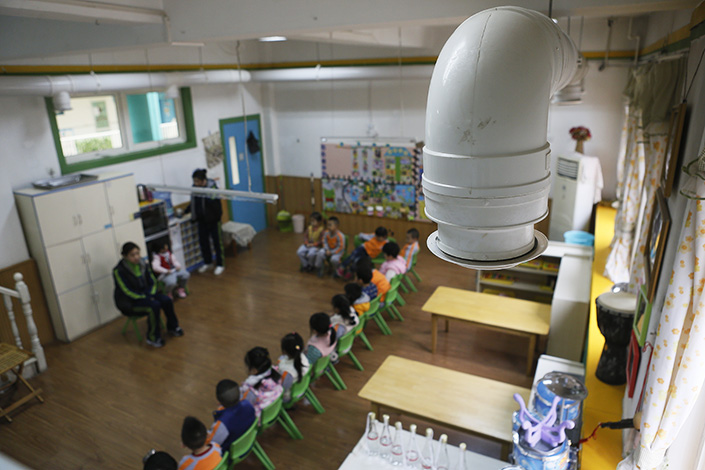 A smog-filtering ventilation system is visible in a classroom in Xi'an, Shaanxi province, on Jan. 9. Experts called for standardized clean-air ventilation systems for all schools in smog-filled areas. Photo:Visual China

(Beijing) — The severe bouts of air pollution that have frequently blanketed northern China this winter have prompted public schools in several cities to rush to install smog-filtering ventilation systems at kindergartens (preschools) and public schools.

Local education departments in Beijing and the east-central city of Zhengzhou have already rolled out pilot programs, and schools and even parents in many cities have contributed to fund clean-air systems.

The local legislatures in pollution-choked Hebei province and Tianjin, both of which border the Chinese capital, have in recent weeks proposed installing similar systems in local schools.

However, academics have expressed concerns about whether programs to equip schools with such expensive ventilation systems can be sustained in the long term, as smog is a chronic problem in northern China. They are also questioning whether such facilities would be made available to all students and how money can be allocated efficiently without a standardized, nationwide funding system.

The Education Bureau in Zhengzhou, the capital of Henan, announced two parallel pilot programs last week to install anti-smog ventilation systems at schools. Education authorities in each of the six districts in the city have been told to fund six schools of their choice for the trial program before the end of February.

Zhengzhou was among the top 10 most polluted cities in China in October, according to the Ministry of Environmental Protection. The city has suffered from two spells of toxic air pollution since late last year, forcing kindergartens and schools to suspend classes for a combined week. The pilot program in Zhengzhou comes hot on the heels of a similar trial program launched in the Chinese capital on Jan. 5.

At schools that are not covered under the trial programs, principals and parents concerned about the health hazards to students from exposure to foul air have opted to pay out of their own pockets to have smog-clearing ventilation systems installed.

But the responsibility for installing such systems should not rest solely on the shoulders of local education authorities, as expenses involved could quickly snowball if all schools in smog-capped regions were to be offered such facilities, said Xiong Bingqi, vice president of Beijing-based private think tank 21th Century Education Research Institute.

“There should be a clear division of responsibilities among local governments, schools and parents in terms of funding and maintenance of such facilities,” Xiong said.

National guidelines are urgently needed to prevent the wasteful allocation of money and to ensure the long-term financial feasibility of installing such expensive ventilation facilities, he said.

Authorities in Beijing haven’t disclosed what portion of the cost it will subsidize for the 11 schools included in its trial program, unlike the pilot program in Zhengzhou, where the government will bear the full cost.

All kindergartens, primary and middle schools in the capital will be required to install pollution-clearing ventilation facilities, the Beijing Municipal Education Commission said. But it is unclear whether the municipal authority will continue to offer financial support to all schools, or whether parents will be asked to cough up the money.

Each classroom needs to have two sets of smog filters in order to keep the air clean, and each set costs about 40,000 yuan ($5,800), according to a salesperson from a purifier manufacturer.

At least 10 billion yuan is needed to install such systems in schools across the Chinese capital, according to Tao Jingzhou, head of the China-Germany Renewable Energy Cooperation Center.

These systems require regular maintenance, and their effectiveness depends on the timely replacement of filters, said Lu Jianguo, who is in charge of home-appliance testing at the China Home Electric Appliance Research Institute. The cost for replacing filters will be massive, he said.

The hefty maintenance bills can be also high, according to Zhou Xianming, the principal of privately run Beijing Zhongxin School. The school installed over 140 sets of smog filters in the last two years.

Zhou’s school, which does not receive government subsidies, spends nearly 200,000 yuan on new filters each year and another 70,000 yuan in utility bills to keep the ventilation system running.

Parents are not required to cover the electricity bills, but they are charged 200 yuan per child each year to cover the cost of new filters, Zhou said.

A centralized state fund to support schools to fix ventilation systems makes more sense, given the wide income gap between affluent coastal regions and other less-developed regions in central and western China, said professor Nie Riming at the Shanghai Institute of Finance and Law.

The funding that public schools in Beijing and Shanghai get per student from their local governments is two or even four times higher than the amounts received by schools in underdeveloped regions in central and western China, he said.

If parents are required to cover part of the cost linked to the new ventilation system, policymakers must take into account their financial situations, he said.

Policymakers considering nationwide standards should also take into account the intensity and frequency of smog in different places to make sure funds are used efficiently, said Chu Yin, an associate professor of public administration at the University of International Relations in Beijing.

If an area experiences heavy air pollution only one or two days a year, air purifiers are a more-affordable and efficient option than fixing expensive ventilation systems, Chu said.

“Or simply allow students to be home-schooled on these days,” Chu said.