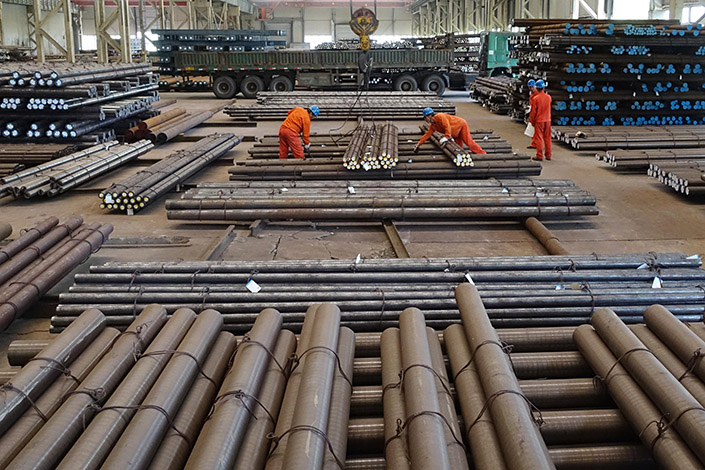 Workers prepare to move steel rods in a Dalian Special Steel Co. factory on May 26. Chen Qiufa, the governor of Liaoning province, has admitted that provincial financial data from 2011 to 2014 was fabricated. Photo:Visual China

(Beijing) — The governor of Liaoning province, the only area in China in a recession, now says three years of recent economic figures were inflated — a rare official confession of data fabrication that has long been suspected and criticized.

The disclosure came after a large number of officials in the province, including ex-provincial party chief Wang Min, fell last year on a vote-rigging scandal.

City and county officials in Liaoning made false claims about fiscal revenues and other data from 2011 to 2014, said Chen Qiufa, who became head of the provincial government in 2015. Chen disclosed the news in a work report to the local legislature on Tuesday, according to the official People’s Daily.

Fiscal revenues over the three years were exaggerated by around 20% overall. In some counties, the reported numbers were more than double the actual income, People’s Daily said, citing official probes.

Chinese local authorities, whose promotions were closely linked to higher economic growth, have often been criticized for interfering with statistics.

But the exaggerations eventually took a toll.

The fictional reports in Liaoning puffed up data comparison bases and were partly blamed for the province’s failure to meet last year’s growth targets for indicators such as gross domestic product (GDP), industrial output, fixed-asset investment, and exports, Chen said.

They also misled the central authorities to allocate less in payments to Liaoning than the province would have otherwise got. Meanwhile, local governments were forced to submit more money to Beijing under China’s central-local tax sharing system, People’s Daily said.

An unnamed city party chief said that taxpayers in his area paid 1,000 yuan ($145) per person per year in extra taxes due to the exaggeration, the publication reported.

“Bragging is taxable as well,” the official was quoted as saying.

Liaoning is one of the three northeastern provinces in the nation’s industrial rust belt that faces mass layoffs and bankruptcies amid the country’s drive to cut manufacturing overcapacity.

It is the only area, at least officially, that has sunk into economic recession with the latest government data showing its GDP decreasing by 2.2% in the first nine months of 2016 compared with a year ago.

However, the poor figures last year may not be as bad for 2017. The official Liaoning Daily reported Wednesday that Chen also told the lawmakers that the province is aiming to achieve an economic growth of “around 6.5%” this year. This ambitiously raises the target from last year’s “around 6%,” which it is likely to miss.

“Fiscal data fabrication by cities and counties in Liaoning province was common and lasted a long time, with many parties involved and various tricks applied,” Chen’s report said, citing a 2016 document by the National Audit Office.

Earlier in 2014, inspectors sent by Beijing blasted the area, saying that “the entire Liaoning province had an epidemic economic data falsification problem,” according to People’s Daily.

“We must not let deceit become a culture. We must leave no room or future for deceit,” he said, according to People’s Daily.

The province has seen most of its top officials reshuffled after it was revealed last year that 523 out of the 616 members of Liaoning's People’s Congress had taken bribes from candidates seeking to be elected to the National People’s Congress in 2013.

The case also directly led Wang, former Liaoning Party secretary and head of the provincial legislature, to be removed from all public posts and stripped of party membership last year. Many other senior officials were punished as well, including some who had already retired.

A seat in People’s Congresses at various levels, though mocked by international critics as rubber-stamp legislatures, provides an opportunity cherished by many, especially businesspeople, to network with powerful government officials.

Economists have long questioned the accuracy of official figures in China, which they say often paint a rosier picture than warranted, though some also have said that trends reflected in data were generally in line with their estimates.

When Premier Li Keqiang was the party chief of Liaoning in 2007, he said that when he evaluated the region’s economic health, his preference was to look at data on electricity consumption, rail cargo volumes and bank lending, and not figures compiled by local statisticians.

Ning Jizhe, head of the National Bureau of Statistics (NBS), in an article in December slammed “periodic” fabrication of official government data and vowed that those crossing the line would “pay a high price.”

The GDP figures reported by regional governments often exceed the national numbers released by the NBS.

The NBS is slated to release GDP figures for 2016 on Friday.