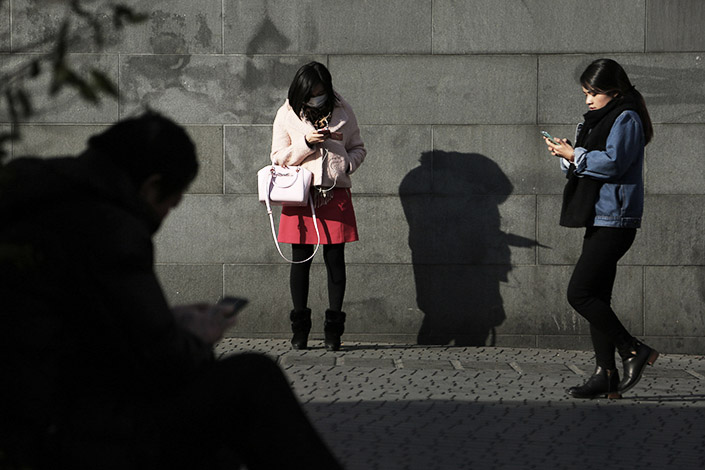 Pedestrians use their cellphones on a public square in Shanghai on Dec.17, 2015. The number of Chinese internet users grew 6.2% last year to 731 million, of which 95% are smartphone users. Photo: Visual China

(Beijing) — The number of Chinese internet users grew by 6.2% last year as smartphones consolidated their place as the primary access point for both web surfing and electronic payments in the world’s largest online market.

China had 731 million Internet users at the end of December, up 43 million from a year earlier, according to annual figures released by the China Internet Network Information Center (CNNIC) on Sunday. Last year’s growth was roughly the same as the 6% increase from the year before, as smartphones made the internet more accessible to millions.

“China’s internet industry has reached a level of standardization and value creation in its development,” CNNIC wrote in a summary of the report. “At the same time, the mobile internet has promoted models that incorporate consumer sharing, smart technologies and a diverse range of other areas.”

The mobile internet has been a major driver of China’s growth, making the medium accessible to millions of people who lack fixed-wire services in China’s smaller towns and countryside. More than 1.3 billion Chinese have cellular mobile service now, moving the country near the 100% penetration rate.

The agency also noted the growing use of internet payments to give to charity, with 238 million yuan ($34.6 million) donated from electronic wallets during the year. It said China now has 91 listed internet companies with a total market value of 5.4 trillion yuan, with industry leaders Alibaba Group Holding Ltd. and Tencent Holdings Ltd. combined accounting for more than half of that.