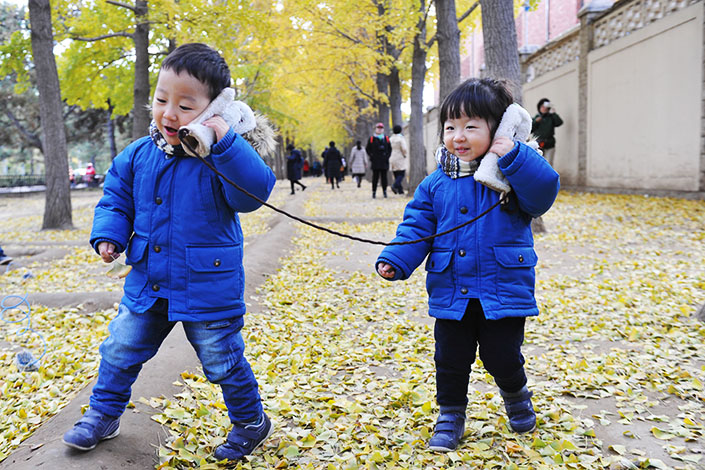 A brother and sister play in Beijing on Nov.7. The number of newborn babies in mainland China last year was 17.5 million, the highest in 16 years, with 45% of the newborns being the second child in their families. Photo:IC

The number of live births rose by 1.31 million to 17.86 million in 2016 after the ban of over three decades was scuttled, according to Yang Wenzhuang, an official at the National Health and Family Planning Commission. The increase comes despite a drop in the number of women of childbearing age, or between the ages of 15 and 49, by an average of 3.5 million a year for five straight years, Yang said.

About 45% of the babies born last year, or just over 8 million, were the second children in their families compared with just 30% in 2013 when the country partially eased its strict family-planning rules, Yang said, citing data from the national census last year. In late 2013, the government allowed couples to have second children if either parent was an only child. Previously, a second child was allowed only if both parents were only children.

The number of babies born each year over the next five years is expected to hover between 17 million and 20 million, and the number of children per woman in their prime childbearing age will rise to about 1.8 from the current level of 1.4 to 1.6, Yang said.

It is still below the internationally accepted level of 2.1 children that a woman in the child-bearing-age range needs to sustain a country’s population levels, according to Dr. Huang Wenzheng, a demographer at Johns Hopkins University in the U.S. state of Maryland. This indicates that the increase in the number of newborns under a two-child policy might not be enough to offset the impact from an aging population, Huang said.

As such, policymakers should further ease and even scratch family-planning rules altogether to encourage couples to have more children, he said.

A country is considered to have a “silvering population” when 1 in 10 people are over 60 years old or 7% of its population is over the age of 65.

More than 16% of China’s population is aged over 60 and those over the age of 65 exceed 10.5% of its total population as of the end of 2015, according to official statistics.