By Ji Tianqing and Han Wei 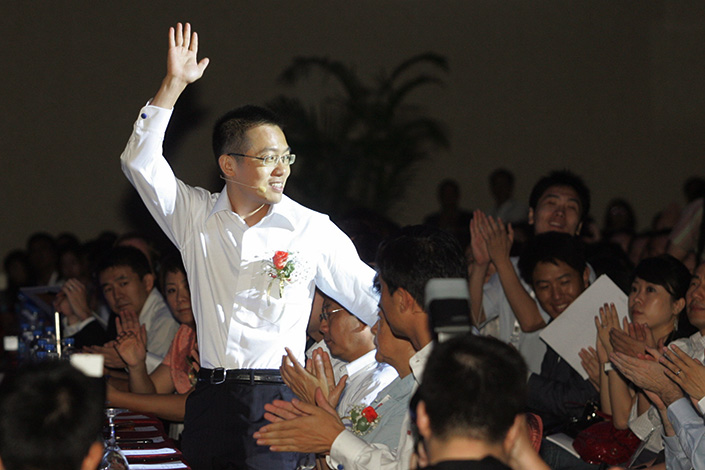 Li Yinan, Baidu Inc.'s then-chief technology officer, waves during the Baidu World forum in Beijing in August 2009. Li was sentenced to two and a half years of prison on Tuesday after a Shenzhen court found him guilty of insider trading. Photo: IC

(Beijing) – One of China’s best-known technology entrepreneurs was sentenced to 2 ½ years in jail and a 7.5 million yuan fine after a court in Shenzhen found him guilty of insider trading.

Li Yinan, 47, is the founder of Niu Technologies Group Ltd., a luxury electric scooter manufacturer. He was convicted by Shenzhen Intermediate People's Court for insider trading in another company’s shares in 2014, in which Li made around 7 million yuan in illegal gains. Li will appeal the court’s decision, a source close to the case told Caixin.

According to prosecutors, in April 2014 Li was working at the venture capital firm GSR Ventures. He learned from Li Xiaotao, a college friend and former colleague, that Shenzhen-listed Wuhan Huazhong Numerical Control Co. Ltd., a machine tool manufacturer in the central province of Hubei, was in talks about a merger. Li Xiaotao was then the president of Wuhan Huazhong.

Li Yinan then bought shares in Wuhan Huazhong via trading accounts in the names of relatives and sold the shares in following months after Wuhan Huazhong’s price rose on the merger news. Li Yinan pocketed 4.39 million yuan from the trading while helping his sister gain 2.36 million yuan more, according to prosecutors.

Evidence showed that Li Yinan and Li Xiaotao chatted via telephone 13 times between February and May 2014, during the blackout period for Wuhan Huazhong’s merger deal, prosecutors said. That included a phone call on the day Li Yinan bought the company’s shares.

But Li Yinan denied that he and Li Xiaotao exchanged information about Wuhan Huazhong and said his investment was based on his own judgment.

Li Yinan was detained by police in Shenzhen in June 2015. The trial opened last Mar. 15.

Li Yinan is often described in domestic media as a prodigy for attending university at the age of 15 and later becoming the youngest vice president of the Chinese telecom giant Huawei Technologies Co. at age 27.

In 2014, he started the electric scooter business Niu Technologies to develop high-end electric scooters inspired by the design of the Italian brand Vespa and by the battery technology of electric car manufacturer Tesla.

Niu Technologies launched its first model on June 3, 2015, two days before Li Yinan’s arrest. As of October 2016, the company had sold more than 140,000 scooters across China, according to the technology news site Leiphone.com.

A previous version of this story incorrectly stated the year that Niu was founded.