By Zhao Qing and Coco Feng 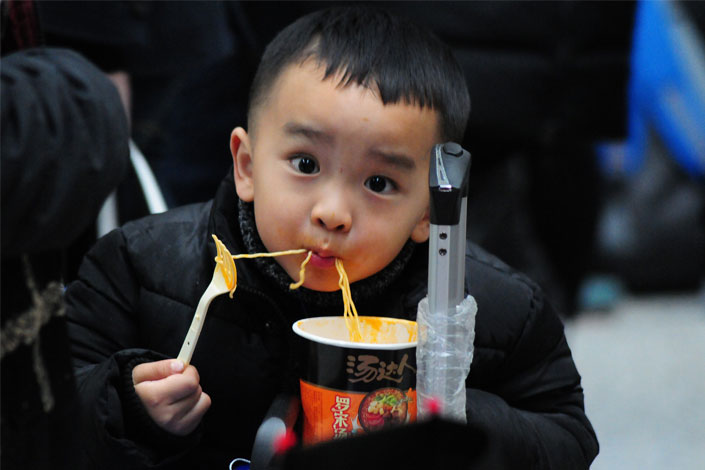 Yang Zhenting, 4, eats instant noodles while waiting with his mother at a railway station in Hangzhou, Zhejiang province, on Jan. 16. Millions of migrant workers rushed home to celebrate the Chinese New Year, which began on Saturday. Photo: IC

(Beijing) — Willie was once a big fan of instant noodles. The college senior had them every day during his three years in high school. But his appetite for them diminished in college as the food delivery industry emerged.

That change is just one pixel in the larger picture of the decline of the instant-noodle industry, once the staple of the standardized food industry.

Demand in the market has slumped after peaking in 2013 for a number of other reasons — some obvious and some not — such as the economy’s shift away from manufacturing, the slower growth in the ranks of migrant workers, faster trains, higher disposable incomes, snack-food competition, and a budding interest in nutrition.

The performance of a front-runner in the industry, Taiwan-based Tingyi (Cayman Islands) Holding Corp., reflects the turn, as it has reported a drop of revenue in its core noodle business since 2014. Tingyi’s revenue was $2.5 billion in the first nine months of 2016, down from $3.2 billion in the same period in 2014.

On prime reason for the decline is China’s slower economic growth, which has had a profound impact on the global market, where the country accounts for 40% of overall demand.

Also, instant noodles, largely consumed by students and migrant workers, have lost their edge as China’s economy transitions from export manufacturing to domestic services. While China is shifting from a labor- and resource-intensive model to a technology-driven one, the number of migrant workers is shrinking, which has reduced sales of the inexpensive food.

For example, instant noodles were once a ubiquitous companion on long train trips. But China in recent years has rapidly expanded its high-speed rail network, doubling its length from 2012 to 2015. Passengers often find the snack food unnecessary on bullet trains that run at about 300 kph.

Even in the old, slow and smelly green carriages, travelers now have found alternatives to instant noodles for journeys that last longer than a day.

“Passengers now have a broader range of choice, such as instant rice, porridge and soup,” said an attendant surnamed Zhu who works on a green train that travels a route that takes 24 hours from Beijing to cities in central China.

The decline of instant noodles is also a result of wealthier Chinese consumers who have become more aware of food nutrition, said Liu Chang, a food and beverage analyst at Tianfeng Securities.

The average disposable income in China has tripled in the past three years, but the prices and ingredients of most instant noodles hasn’t changed much.

However, one top noodle maker, Uni-President Enterprises Corp., targeted high-end customers with its March 2016 launch of a “Porsche instant noodle” that is eight times as much as an ordinary pack. However, many of shoppers ordered the luxury noodle during half-price discount season in November’s “double eleven” online shopping festival, and many buyers said the taste didn’t warrant the higher price, according to the comments on Uni-President’s store on Tmall, an online marketplace of Alibaba Group Holding Ltd.

But it is too early to be entirely pessimistic about noodles, as the food industry as a whole is still the second-fastest-growing industry in terms of sales, up 12% from 2013 to 2015, following beverages, according to Wind.

In the beverage sector, previously largely occupied by sodas, offerings such as herbal tea and chestnut milk are catching up in China — another sign that Chinese people now do care about nutrition.