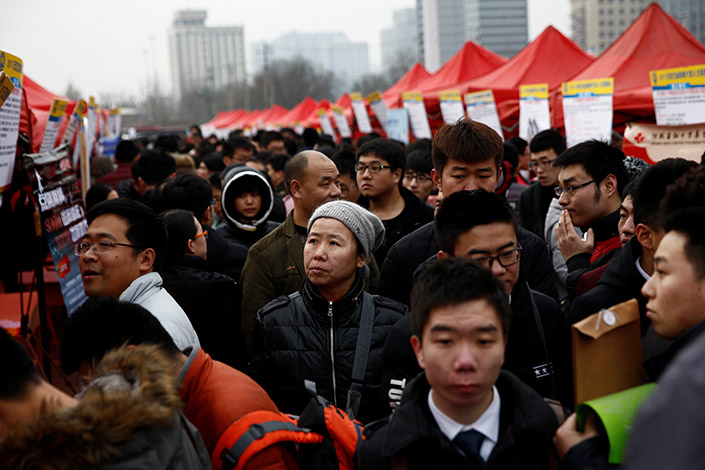 Job-seekers attend an open-air job fair in the center of Shijiazhuang, Hebei province, on Feb.6. The Chinese government aims to create more than 50 million jobs from 2016 to 2020 and keep the urban unemployment rate under 5%. Photo:Visual China

(Beijing) — China aims to create more than 50 million urban jobs by 2020, an official employment plan shows, but slowing growth prospects are weighing on local authorities’ projections for income increases in 2017.

More than 50 million new jobs in cities are expected to be created during the five-year period ending in 2020, the State Council, China’s cabinet, said in its 13th five-year employment promotion plan, which was published on Monday.

The target is smaller than the more than 64 million new positions provided over the 2011-2015 period, according to official figures.

The government also aims to keep the urban registered unemployment rate under 5% over the five years to 2020, according to the plan. The actual rate during the last five-year period until 2015 was about 4.1%.

Beijing’s job and unemployment rate goals have often been exceeded by the actual numbers — it had planned to create more than 45 million new posts and keep the urban registered unemployment rate under 5% during the 2011-2015 period.

But concerns persist over the prospects for China’s growth, which hit its slowest rate in 26 years of 6.7% in 2016 and is expected to continue to weaken this year. The economy increased at a stronger-than-expected pace of 6.8% in the fourth quarter of last year, but many analysts believe the uptick is unlikely to be sustainable.

Among the 30 provincial-level governments that have announced their growth targets for 2017, 24 expected their expansion to be stable or weaker than last year’s, and only six raised their goals.

Local authorities were also rather pessimistic about their income increases this year — 22 out of the 29 provinces and regions that have published their 2017 fiscal budgets anticipated their revenues will rise at a stable or slower rate than they did in 2016, and just seven aimed to have higher growth.