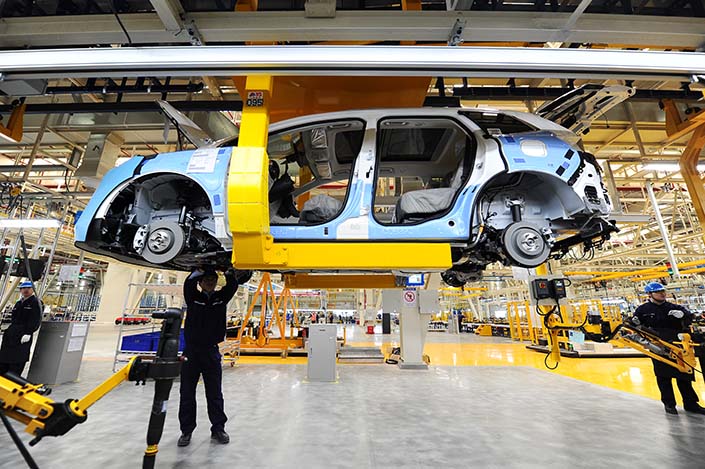 Workers assemble a Changan Ford car in a factory in Hangzhou, Zhejiang province, on March 24, 2015. Sales of General Motors Co. and Ford Motor Co. vehicles tumbled in January by 24% and 32% respectively from the same month last year, a drop attributed to the early Lunar New Year holiday and the end of tax incentives for some vehicles. Photo: Visual China

(Beijing) — Leading U.S. automakers GM and Ford said their China sales dropped by more than 20% in January, as seasonal factors and reduced government incentives for cleaner vehicles eroded their performance.

General Motors Co.’s China vehicle sales dropped 24% in January to 321,264, while Ford Motor Co. said its figure dropped by an even larger 32% to more than 88,000 vehicles, according to separate statements released by the companies on Thursday.

Both cited the timing of China’s Lunar New Year holiday in January this year as a major factor, since most dealerships are closed during that period. By comparison, the holiday last year fell entirely in February. They also cited the government’s recent reduction of tax incentives for purchasing more-fuel-efficient cars, which officially took effect on Jan. 1.

“January was an unusual month with the earlier timing of the Chinese New Year holiday and the impact of the reduced tax incentive,” Ford Vice President Peter Fleet said. “Sales of vehicles not affected by the tax incentive were strong. … So the underlying market conditions and customer demand for our … products remains strong.”

The declines were larger than expected, but may not necessarily be significant for the broader market, said Wang Cun, vice director of the China Automobile Dealers Association. He noted that Geely Automobile Holdings Ltd., one of China’s leading domestic automakers, earlier this month reported a 71% gain in January, with 102,653 vehicles sold during the month.

“We never thought the January decline for U.S. automakers would be this big,” Wang said. “But the market also needs some time to adjust,” he added, referring to the new tax plan.

China is the world’s largest automobile market, with sales rising 13.7% last year to more than 28 million vehicles on the back of strong demand from the nation’s growing middle class. But growth is expected to slow sharply this year with the lower government incentives and as the broader economy slows, with the China Association of Automobile Manufacturers predicting just 5% expansion for 2017.