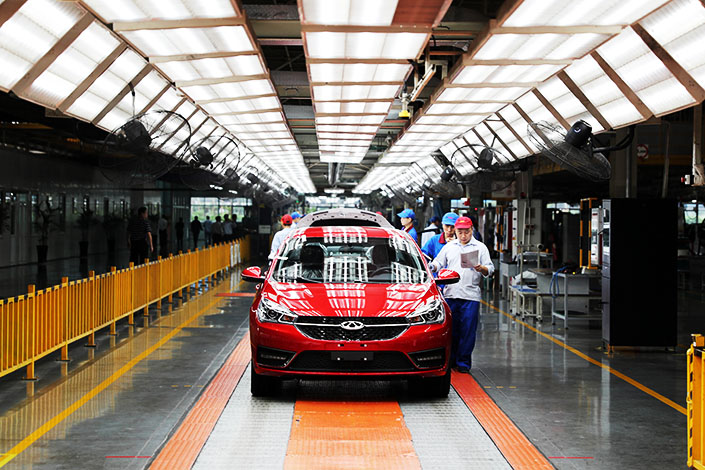 Chery Automobile Co. Ltd. employees work on an assembly line inside the manufacturing plant in Anhui province in October. Chinese automakers sold 28.1 million cars in 2016, up 14.5% from 2015. Photo: Visual China

(Beijing) — China vehicle sales rose 13.7% in 2016, lifted by a year-end surge as consumers raced to take advantage of government incentives for small cars set to expire at year-end. But sales are expected to slow sharply this year under a new set of less-attractive incentives, coupled with a slowing economy.

China’s vehicle sales topped 28 million units in 2016, including December sales of more than 3 million, the China Association of Automobile Manufacturers said on Thursday. Sales in the world’s largest auto market grew in every month of the year except for February.

But the association forecast that growth will slow sharply to just 5% this year, with the strongest demand coming from smaller cities.

An acceleration in growth rates was apparent from June, as consumers raced to take advantage of government incentives set to expire at the end of the year for smaller cars. Beijing announced last month it would offer new incentives this year, but those were less generous than the previous ones.

Within the larger numbers, new-energy car sales drew special attention due to Beijing’s strong incentives to promote the sector. Those incentives also produced a number of scandals involving companies and buyers who used fraud to take advantage of government largesse.