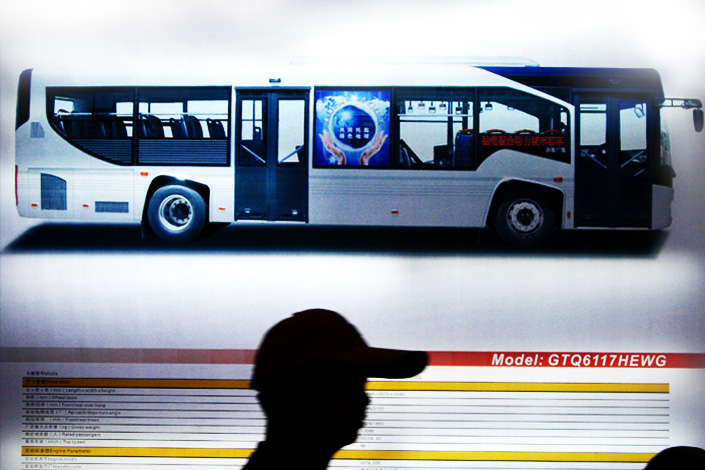 (Beijing) — Telecom-equipment and smartphone company ZTE Corp. has purchased a small maker of buses and will build an affiliated $2 billion manufacturing base as part of its new move into smart and new-energy vehicles, an executive told Caixin.

The company's purchase of a controlling interest in Granton Bus follows more than a year of negotiations and cost ZTE "hundreds of millions of yuan," according to a knowledgeable source. It comes as ZTE faces stiff competition in both its older telecom-networking equipment and also its newer smartphone business.

As part of its broader program to develop next-generation vehicles, ZTE will build a manufacturing base near Granton's headquarters with an investment of 14.6 billion yuan ($2.1 billion). Upon completion in two phases, the complex will be able to make up to 10,000 new-energy cars and 20,000 special-purpose vehicles per year, the company said.

New-energy vehicles are generally defined as those powered only partly or not at all by fossil fuels. The most advanced among that group are electric vehicles, as well as hybrid vehicles, which draw their power from a combination of gasoline and electricity.

"We want to make vehicles," Tian Feng, an executive in ZTE's smart-car division, told Caixin. "We hope to become one of the top five makers of commercial vehicles within the next five years."

Granton is based in the southern city of Zhuhai, not far west of ZTE's own headquarters in the nearby boomtown of Shenzhen, which borders Hong Kong. The bus maker is relatively small, with annual sales of about 1,000 vehicles seating 15 to 65 people, according to its website.

Those buses can sell for up to 3 million yuan each, giving Granton annual revenue of about 1 billion yuan. Despite its small size, the company has managed to tap export markets, selling its buses in Hong Kong, Germany and the Netherlands.

ZTE's move into cars dates back to last year, when a team of top executives began looking for related acquisition targets and strategic partners.

"ZTE isn't simply doing this impulsively," Tian said. "On the one hand, a lot of motor vehicle technology is quite mature after 100 years of development. At the same time, user experience is increasingly determined by interaction between people and machines. ZTE has a strong position in IT, the web and interconnected car technology."