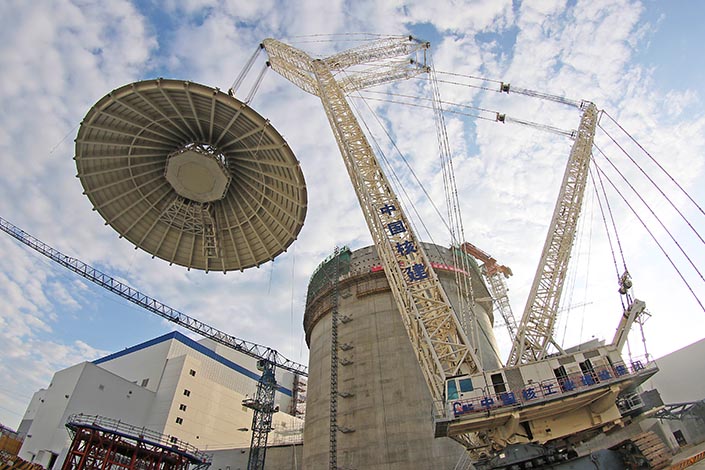 A containment dome for the No. 2 nuclear unit is installed at the Haiyang Nuclear Power Plant in Haiyang, Shandong province, on Sep. 12, 2015. China has resumed construction of three inland nuclear power plants in Hunan, Hubei and Jiangxi provinces. Photo: IC

(Beijing) — China’s inland nuclear power projects are on track to break ground before 2020 as Beijing tries to lessen its dependence on coal even as local residents worry about the potential for a repeat of Japan’s Fukushima nuclear meltdown of 2011.

China has “basically determined” the sites for its future inland nuclear power plants, which may begin construction before the close of the country’s 13th Five-Year Plan in 2020, said Wang Yiren, deputy director of the China Atomic Energy Authority, in an interview with state media on Monday.

He said that construction has already begun on three inland nuclear plants, located in the interior provinces of Hunan, Hubei and Jiangxi.

The building of nuclear plants in China’s interior has sparked wide debate over their feasibility and potential for accidents. Wang’s comments mark the first time that authorities have acknowledged construction progress at inland nuclear plants in a sector often criticized for its lack of transparency.

“Interior plants will use cooling towers instead of river water. No waste will be pumped into the Yangtze River,” Wang said in an interview with China National Radio, seeking to dispel concerns about the potential for pollution of local waterways. “As long as the same safety standards apply to inland reactors as they do for coastal ones, there should be no reason for concern.”

The extreme radiation that plagues Fukushima to this day is mainly due to mishandling of the disaster years back, when operators did not want to ruin the reactor by cooling the pile with cold seawater, he said.


Construction plans for the three plants were suspended in 2011 during a four-year government moratorium on nuclear facilities immediately after Japan’s Fukushima Daiichi power plant had three nuclear meltdowns after getting swamped by a tsunami. The projects were reactivated last year with the initiation of the 13th Five-Year Plan, which set an ambitious goal to supply 58,000 megawatts (MW) of nuclear power by 2020.

China is still one-third short of that goal, now generating 33,650 MW of nuclear power each year from 37 reactors. Officials said earlier that there was no immediate need to begin work on inland sites.

While Beijing has been considering the addition of more plants inland, scholars have advised it to do so with thorough thought and preparation.

Dense population inland, inadequate capacity to deal with radioactive waste and the lack of stable water resources in the interior to act as coolants are all reasons why the risks of inland plants outweigh the benefits, said Wang Yinan, a researcher with the Development Research Center of the State Council.