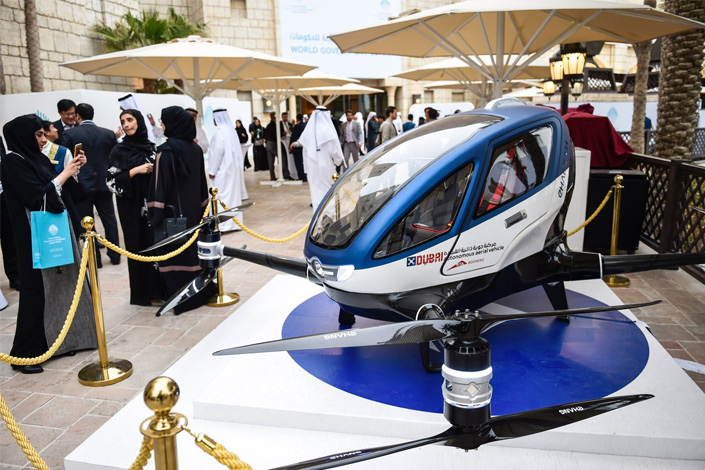 An EHong 184 drone is displayed at the World Government Summit 2017 at the Madinat Jumeirah resort in Dubai, United Arab Emirates, on Tuesday. Photo: IC

(Beijing) — Chinese drone maker EHang Inc. announced on Wednesday that it will supply passenger-carrying drones to Dubai, which is aiming to become in July the world’s first city to allow such vehicles.

Dubai, the largest city in the United Arab Emirates (UAE), plans to bring in the EHang 184 model. The drone is able to carry one person and a small suitcase with a combined weight of 117 kg and fly for half an hour, or 50 km, on a single charge at a peak altitude of 3.5 km, according to EHang’s website.

Passengers need only choose the destination, and the aerial vehicle will be piloted and monitored by a command center on the ground.

To ensure safety, if any components malfunction or disconnect, the drones will immediately land in the closest possible area, and communication between the machines and the command center is encrypted, according to EHang’s website.

The introduction of self-flying passenger drones is part of Dubai’s plan to create a smart city by 2030, when 25% of its transport will be automated.

EHang, a fast-growing drone maker in China that was set up only three years ago, unveiled the 184 model at the annual Consumer Electronics Show in Las Vegas last year.

The partnership with Dubai marks a key step to commercializing EHang 184, CEO Hu Huazhi said in a statement.

EHang is not the only industry player that is exploring the nascent sector. Aircraft manufacturer Airbus Group SE rolled out plans to make passenger drones in 2016 and is set to test the first prototypes by end of this year. Israeli tech firm Urban Aeronautics Ltd. is working on passenger carrying drones and performed its first autonomous pattern flight in November.