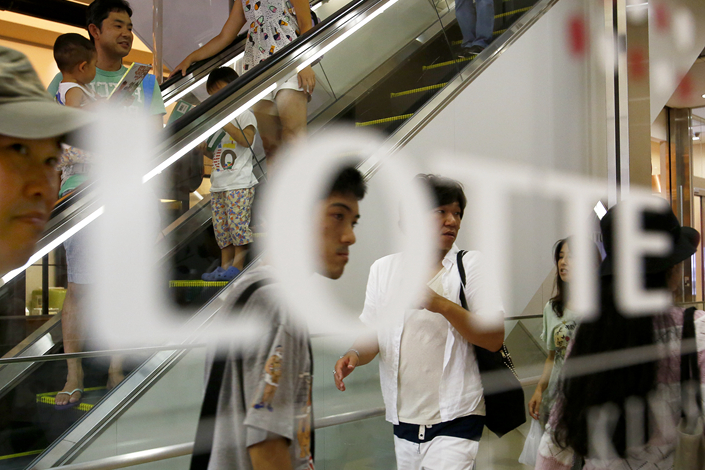 China's official Xinhua News Agency has warned in an editorial that retailing giant Lotte could face "severe" consequences if it sells a golf course it owns to the South Korean government for deployment of a defensive anti-missile system. Photo: IC

(Beijing) — China’s state-run Xinhua News Agency has warned retailing giant Lotte Group of “severe” consequences if it sells to the South Korean government a golf course that Seoul wants to use in its deployment of a defensive anti-missile system.

The South Korean conglomerate has ceased several China operations recently, including shuttering its flagship store on Alibaba’s Tmall online marketplace in January and suspending construction work on a theme park in the northeast Chinese city of Shenyang in December.

The moves followed a flare-up in tensions between Beijing and Seoul over the U.S. military’s anti-ballistic-missile system. The South Korean government is planning to deploy the Terminal High Altitude Area Defense platform, more commonly known as THAAD, which China believes could be used for spying.

Although China Foreign Ministry spokespeople have denied links between Lotte’s operational changes and political tensions, views expressed by state-run Xinhua are often seen as a reflection of the government’s official stance.

“By association, Lotte will hurt the Chinese people, and the consequences could be severe,” Xinhua warned in a commentary published on Sunday. “The right decision would be for Lotte to defer or reject the deal.”

The company is being “very careful on that issue” and is not sure when the final decision regarding the land offer will be made, Lotte spokesperson Han Bo Young told Caixin in an email.

Lotte runs 115 supermarkets and five shopping malls in China, accounting for more than 60% of its footprint overseas.

Political conflicts had adverse consequences for individual companies operating in China in the past. In 2008, there were demonstrations against French supermarket chain Carrefour after a protester in Paris tried to snatch the Olympic flame from a Chinese paralympian.

But during the 2008 boycott of Carrefour, official Chinese media called for calm.

If Lotte agrees to go ahead with the land sale, China may take political, economic and even military action in a bid to prevent it, and more South Korean companies doing business in China might be affected, said Wang Sheng, professor of the College of Administration at Jilin University.