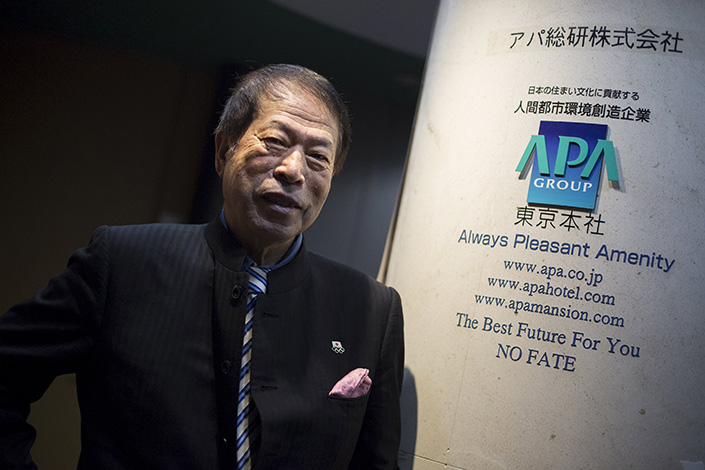 Motoya Toshio, the CEO of APA Group, poses for pictures at the hotel group's headquarters in Tokyo in April 2015. APA sparked outrage in China after placing in its hotel rooms Toshio's book. which claims the 1937 Nanjing Massacre never took place. Photo: Visual China

(Beijing) — China’s tourism authority and the nation’s travel industry are boycotting Japan’s APA Group after it refused to remove from its hotel guest rooms copies of a book denying that the 1937 Nanjing Massacre under Japanese imperial troops took place.

The China National Tourism Administration has requested all outbound travel companies and online platforms to terminate their cooperation with APA, according to a statement on its official website.

On Wednesday, the hotel group did not show up as a search result on several major travel websites, including Ctrip, Qunar, Alibaba’s Fliggy, and Tuniu.

Tuniu said it banned APA from its site as early as Jan. 16, four days after a Sino-American couple found the nationalist-leaning book, written by APA CEO Toshio Motoya, in their APA hotel room during a visit to Japan. Their discovery, which they posted online, sparked outrage on Chinese social media.

In a statement last week, APA refused to remove the books, citing “freedom of speech,” saying the book is “for the purpose of letting readers learn the fact-based true interpretation of modern history.” In response to China’s official boycott, the hotel chain operator again on Tuesday said it will not change its policy.

The Nanjing Massacre began in mid-December 1937 after Japanese troops captured the then-Chinese capital during the War of Resistance Against Japanese Aggression, also known as the Second Sino-Japanese War. China says up to 300,000 people in Nanjing were killed in the subsequent six weeks of mass murder and mass rape, while some Japanese say far fewer died or deny the massacre even took place.

In 1946, the International Military Tribunal for the Far East in Tokyo estimated that over 200,000 Chinese were killed during the first six weeks of the Japanese occupation.

Nagoya Mayor Takashi Kawamura said at a news conference on Monday that the massacre didn’t take place but, if it did, all Japanese people should go to Nanjing and kneel down.

That prompted a response the next day by Chinese Foreign Ministry spokeswoman Hua Chunying. “As for the comments by the mayor, I want to remind him that the Nanjing Massacre is a historical fact recognized by the international community,” she said. “The mayor should deliver on what he said.”

Chinese citizens are the largest bloc of tourists to Japan, accounting for 26% of all foreign visitors in 2016, according to the Japan National Tourism Organization. But friction over historic incidents between the two Asian nations has often offended Chinese people, who in the past have refused to buy Japanese cars or patronize Japanese shopping malls.