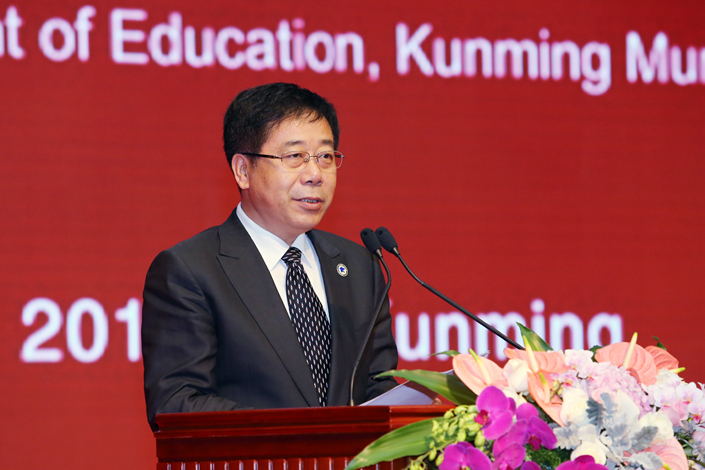 (Beijing) — A race among Chinese universities to attract the best brains with fat paychecks and millions of yuan in housing allowances is threatening colleges in the country’s impoverished central and western regions with a loss of talent.

Triggering the battle was a draft plan published in January by three central government agencies, including the Ministry of Education, that calls for the transformation of a handful of Chinese universities into world-class institutions by 2020.

Universities with deep pockets have been tripping over each other to woo star professors and researchers ever since. East China University of Political Science and Law in Shanghai announced an 8 million yuan ($1.16 million) one-time housing subsidy and a 1 million yuan annual salary for senior professors, Wenhui Daily reported. Another Shanghai-based rival, East China Normal University, promised under the central government’s talent program a one-time housing allowance of 1.8 million yuan plus other benefits to young academics who return to China after studying abroad.

This recruitment drive reached a fever pitch within weeks, prompting Education Minister Chen Baosheng to dampen it. Concerned it would widen regional educational inequalities, Chen on Friday urged well-endowed universities along the eastern coast “to show mercy” when poaching talent from schools in poorer areas in central and western China, saying “the practice amounts to cutting off the bloodline of universities in less-affluent areas.”

But such warnings will do little to curb the exodus of professors from universities in underdeveloped regions, said Ma Liang, an associate professor of public management at Renmin University in Beijing.

Instead, policymakers should come up with a system similar to hefty transfer fees charged by soccer clubs when a player is poached, he said. “Such fees can be used to compensate schools that have invested in research programs or other projects by professors who opt to leave,” Ma said.

China has set its eyes on boosting its R&D spending to 2.5% of its gross domestic product (GDP) by 2020, and the government has launched several programs to attract the best brains into research labs and university classrooms. Recruiters have been targeting foreign-trained scholars returning under the “1,000 Talents” program and those recognized by the Chang Jiang Scholars Program for their outstanding academic work, Ma said. Members of government-backed think tanks such as the Chinese Academy of Sciences and Engineering are also being hotly pursued, he said.

But because most universities in China are affiliated with a local government, the schools in rich provinces have an unfair advantage.

Authorities in China’s southern tech hub of Shenzhen caused a stir last year after announcing an eye-popping benefits package for top local and foreign talent that chose to relocate there. It included a 6 million yuan signing bonus or a 10-year lease on a 200-square-meter home. Those who opt to stay for a decade are entitled to an additional 4 million yuan payout or get ownership of a house, according to a city government guidelines issued in September.

An annual salary of 1 million yuan and a home plus millions in research grants have now become a standard package for top professors and researchers in China, several researchers specializing in tertiary education said.

“A housing allowance is the biggest draw, particularly in Beijing, Shanghai and Guangzhou, where home prices are very high,” Ma said.

While colleges in less-developed regions in central and western China cannot match these hefty incentives brace for a brain drain, elite Chinese universities have seen their position in global rankings rise. Three of them — Peking University, Tsinghua and Fudan — made it to the top 50 in the 2016 QS World University Rankings in comparison with only two, Tsinghua and Peking universities, a year ago.