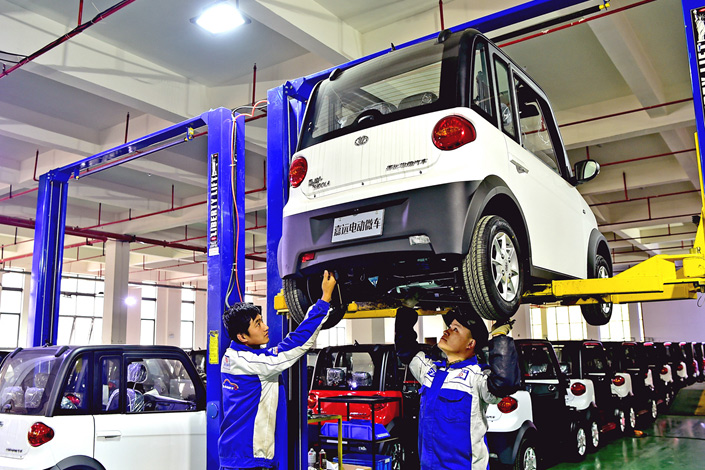 Workers assemble electric cars at an auto plant in Chuzhou, Anhui province, on Dec. 3. The Chinese government plans to adjust its quotas for automakers' new-energy cars, a move that follows complaints from German automakers that recently introduced standards are too draconian. Photo: IC

(Beijing) — China will adjust its quota system designed to promote new-energy car sales, a decision that followed complaints from some foreign automakers that recently introduced standards were too difficult to meet.

A source at the industry’s regulator, the Ministry of Industry and Information Technology (MIIT), told Caixin that adjustments were being planned, but did not elaborate.

German media earlier reported that German automakers’ concerns over difficulty meeting the future quotas were discussed at high levels between the two countries, and that led to the decision to make adjustments.

An MIIT source said the expected adjustments are still under discussion and could be finalized within the next week.

Under China’s quota system announced in September, new-energy vehicles would be required to make up 8%, 10% and 12% of all vehicle sales for individual automakers in 2018, 2019 and 2020 respectively. The plan consists of a point system in which manufacturers are awarded more points for pure electric cars than for hybrid models, which run on both electricity and traditional fossil fuels.

Most German carmakers in China rely heavily on luxury-vehicle sales. They had expressed particular concerns after the quota system was announced since they are generally less advanced in new-energy vehicles than their U.S. and Japanese peers. That led German Foreign Affairs Minister Sigmar Gabriel to raise the issue during a visit to China in November, resulting in a pledge by China to further look into the matter.

China has placed a great importance on boosting sales of new-energy cars as part of its efforts to clean up the country’s polluted air and also to encourage development of new technologies that can someday be exported.