By Yang Ge and Pan Che 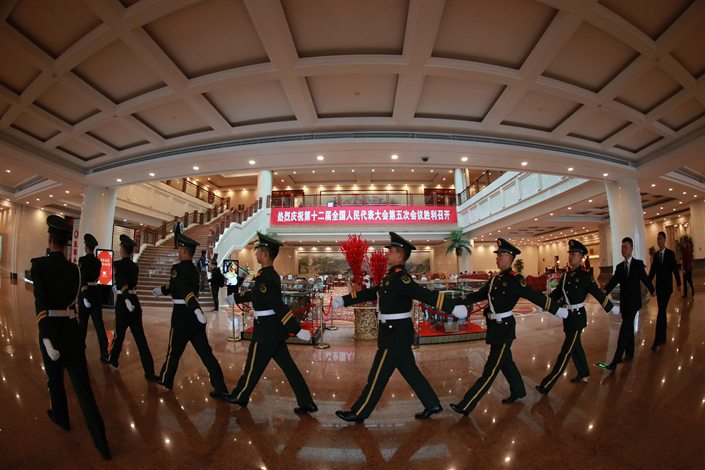 Soldiers from Beijing's armed police who are responsible for security at the meetings of the National People's Congress and Chinese People's Political Consultative Conference arrive at the Guoerzhao Hotel in Beijing on Tuesday. Photo: IC

(Beijing) — Curbing wasteful socialist-era business practices and taming unruly real estate and lending sectors will take center stage at the annual meeting of China’s legislature, which starts next week, with some also looking for signs of a pickup in economic growth.

The annual meeting of the National People’s Congress (NPC) often sets the tone for Beijing’s economic priorities in the year ahead, with many policies hammered out in advance of a session that runs through mid-March. The NPC coincides with the Chinese People’s Political Consultative Conference (CPPCC), a separate meeting that starts on Friday that’s attended by many of the nation’s top business and social leaders who advise legislators on various issues.

Signals coming from President Xi Jinping this week indicated that taming the country’s real estate and gray lending sector will be top priorities in the year ahead. Within the corporate sector, a campaign to reduce excess capacity in sectors like steel and coal could be expanded to other industries, and the closing of dying state-owned enterprises (SOEs), sometimes called “zombie companies,” could also accelerate.

Others are also watching for signs that China’s economy could start to regain some of its previous momentum following two years of slowdown from its double-digit growth of much of the last two decades.

“One of China’s priorities is supply-side reform aimed at improving efficiency and productivity of the state-owned enterprises,” said Edward Sze, a corporate strategy adviser at Gao Feng Advisory. “In 2017, we can also expect further deepening of structural reform on the supply side, accelerating overcapacity reduction, encouraging industry consolidation and reducing corporate leverage.”

At the highest level, all eyes will be focused on Premier Li Keqiang’s economic growth forecast for 2017 that is typically included in his working report, which will be delivered at the NPC’s opening on Sunday. Analysts are forecasting that growth will be steady this year in the 6.5% to 7% range, roughly the same as last year’s 6.7%, which marked the nation’s slowest expansion in 26 years.

Last year, Li broke with tradition and provided a range of 6.5% to 7% for the government’s growth target for 2016, compared with previous years when a specific number was always given. This year, observers are expecting a similar range, and some say an actual number could be eliminated completely to give the government more flexibility.

“Theoretically, it’s good for long-term economic restructuring and development if we don’t set a strict growth target,” said Lou Feng, an expert at the Chinese Academy of Social Sciences. “However, there is a target set by President Xi that by 2020, residents’ income should be doubled. If GDP growth is too low, then we may fail to meet the target.”

Earlier forecasts for flat growth could also get some upward revision, following surprisingly bullish remarks over the weekend from Liu Shijin — formerly a deputy chief of the Development Research Center (DRC) of the State Council, China’s cabinet — that China’s economy may have bottomed out and be set for a period of stable expansion.

“In the past few days, it’s been interesting to see there have been a few articles starting to talk about growth acceleration,” said Christopher Balding, a professor at the HSBC Business School at Peking University Shenzhen. “It’s anomalous from previous years, when they were talking about stability.”

China is in a period of economic transition following years of breakneck growth that propelled it past Japan to become the world’s second-largest economy behind only the U.S.

A big portion of that growth came from SOEs, whose rapid expansion sometimes was more influenced by local governments that were more interested in boosting their economies than they were in commercial factors. As a result, the nation has been left with overcapacity in a wide array of sectors, leading to depressed prices as many companies produce at a loss.

At the same time, another separate field of inefficient “zombie companies” has been allowed to stay open, even though they produce very little or nothing, because local officials fear instability from layoffs and other losses to their local economies.

But new remarks from Xi hinted that closures of such companies could accelerate.

“The government should make more efforts to guarantee subsistence allowance and re-employment for those laid off, and grab effective methods to dissolve corporate debts and prevent moral hazard,” Xi was quoted as saying at the Central Leading Group on Finance and Economic Affairs meeting this week. “China will accelerate building a supervision coordination mechanism and strengthen macro-prudential regulation to prevent systemic risks.”

The past year has also seen Beijing move aggressively to reduce capacity in the coal and steel sectors, and that campaign could be extended this year, according to a research note from Nomura.

“The government is likely to extend capacity reduction efforts … to other industries such as cement, electrolytic aluminum and shipbuilding,” Nomura wrote. “As it is easier for the government to reduce capacity in industries that are dominated by state-owned enterprises, any capacity reduction may be preceded by a consolidation of the state-owned enterprises in those targeted areas.”

Homes Meant for Living, Not Speculating

Xi’s remarks also addressed China’s overheated real-estate market, whose prices in big cities like Beijing and Shanghai are often higher than those in major Western markets due to rampant speculation. China took steps to cool the market after rapid increases last year in top cities like Shanghai and Shenzhen, mostly by placing limits on potential buyers.

“Houses are built to be lived in, not for speculation,” Xi said at the Central Leading Group on Finance and Economic Affairs meeting. Expanded controls in the year ahead could extend to limiting new activity by real estate developers, which would broaden last year’s efforts that focused on limiting buyers, according to a related editorial on the WeChat account of the People’s Daily’s overseas edition, the official voice of the Communist Party.

Xi also raised the subject of tackling China’s gray lending market, which has flourished in recent years due to private sector demand that has traditionally been underserved by traditional state-run banks. While meeting a real need, the rise of such a sector creates big risks due to lack of government oversight, government officials have said.

“Financial supervisors should fix weak links and act hard against illegal activities,” Xi was quoted as saying at this week’s meeting.