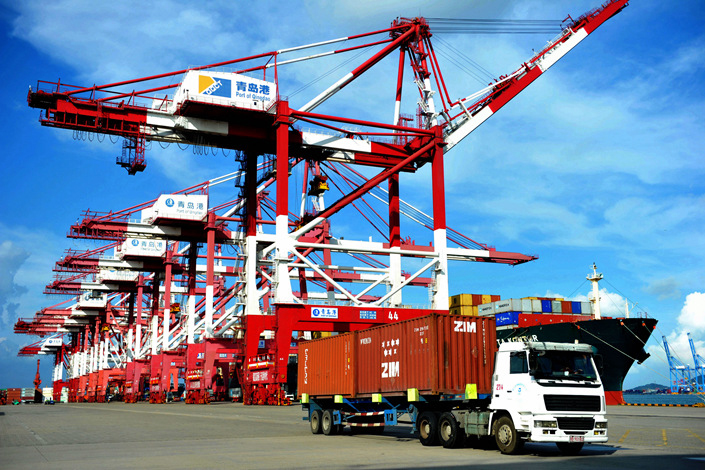 A truck transports containers to be shipped abroad from a truck on a wharf at the Port of Qingdao in Qingdao, Shandong province, on Aug. 8. China had its first trade deficit in three years last month. Photo: IC

The surprisingly robust rebound in imports may prove short-lived, while the disappointing performance of exports suggested that foreign demand remained slack, with rising anti-globalization led by U.S. President Donald Trump casting a pall on the outlook of Chinese overseas shipments, analysts said.

Imports soared 38.1% from a year ago to $129.2 billion in February, according to figures from the General Administration of Customs, beating the median projection of a gain of 18.8% in a poll of economists by Caixin.

Therefore, the country logged a $9.15 billion trade deficit last month, the first since February 2014, when imports exceeded exports by $22.99 billion.

Exporters rushed to deliver while importers postponed purchases in January, the month in which this year’s Lunar New Year fell, which also distorted exports and imports in February, he said.

But domestic demand may moderate as the property market is expected to cool with the effects of government tightening measures to curb price increases kicking in, and as Beijing struggles to strike a balance between maintaining growth and implementing structural reforms, he said.

“Hence, we expect import growth to slow in the near future,” Zhao said.

The value of key resources China imported increased at a much faster pace than their quantity this year, according to customs figures, as commodity prices climbed higher.

For example, while iron ore imports rose 12.6% year-on-year in quantity in the January-February period, their value soared 94.6%.

The quantity of imported coal gained 48.5% in the period, but its value nearly tripled, customs data showed.

February’s fall in exports showed that external demand was yet to turn around, while the competitiveness of Chinese goods declined due to rising land and labor costs and stricter requirements to protect the environment in recent years, Wen Bin, an analyst with Minsheng Bank, told Caixin.

China’s overseas shipments have softened since 2015, posting drops in 21 of the past 26 months, according to Customs figures.

“Competition and disputes in trade between China and the U.S. may intensify now that Donald Trump has come into power, affecting exports of certain Chinese products,” he said.

China still held a yawning trade surplus against the U.S. in the first two months of the year at $31.84 billion, though it declined 12% from the same period in 2016.

February’s trade performance may increase the uncertainty about the sustainability of China’s growth acceleration that started in the latter part of last year. Economic expansion recorded a better-than-expected rate of 6.8% in the last three months of 2016, picking up from a 6.7% gain in the preceding nine months. Official data this year also seemingly pointed to economic traction.

The producer price index, a gauge of product prices received by producers and a leading indicator of consumer inflation, in January hit its highest since August 2011, with the government attributing the surge mainly to higher international commodity prices.

Activity in the manufacturing sector has continued to expand, with both the Caixin China General Manufacturing Purchasing Managers’ Index (PMI) and the official PMI increasing in February from January and factories reporting an increase in new orders.

But many analysts have also voiced concern that growth may lose steam later in 2017 due to possible corrections in the overheated property market, sluggish private investment, and limited government financial resources to boost infrastructure investment.

Premier Li Keqiang in his government work report delivered on Sunday announced that this year’s economic expansion target has been set at “around 6.5%, or higher if possible in practice.”