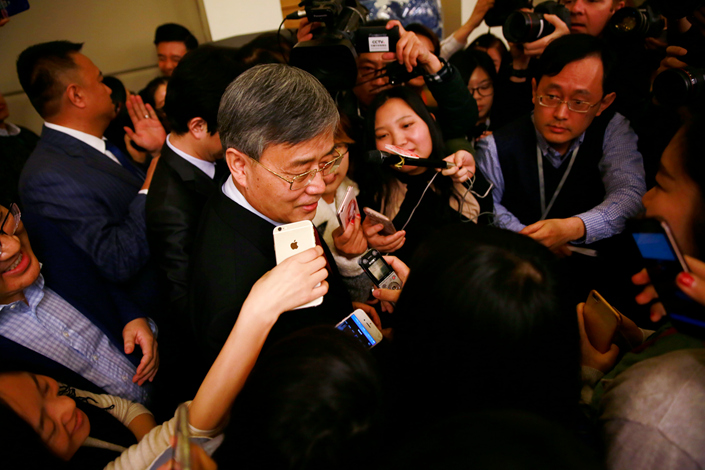 (Beijing) — When he was China’s top securities regulator, Guo Shuqing won a reputation for being one of the country’s most reform-minded officials for changes he made in stock markets that had long been plagued by government interference and insider trading.

On March 2, Guo appeared at his first news conference after taking office as the chairman of the China Banking Regulatory Commission (CBRC) and immediately vowed to crack down on shadow lending, enhance supervision over banking’s wealth management sector, and curb risky financing activities.

Guo’s past leads many to believe he is about to revamp the banking sector. During his tenure as chairman of the China Securities Regulatory Commission (CSRC), Guo introduced over 70 policy directives aimed at invigorating the market by reducing administrative interference and giving nonbank financial institutions more tools and services they could offer to clients.

Significant regulations included expanding the business scope of securities firms, reviving the bond market, strengthening public company information disclosure, and easing a stock-listing approval system. Most of Guo’s proposals have helped re-gear the long-stalled securities-industry reform. But efforts to replace the listing approval process by a market-driven, registration-based system have been hindered by vested interests.

After leaving the CSRC to head to the northeastern province of Shandong from June 2013 to February, Guo continued his reform momentum. He launched a series of orders to speed up industrial upgrades and streamline government administration in the coastal province, one of the country’s most economically important ones. His intensive push for reform was dubbed “Guo’s New Deal” — an allusion to then-U.S. President Franklin Roosevelt’s Great Depression-era economic programs of the 1930s.

“Guo’s working approach is highly purposeful and methodical. He will have a lot of room to play in the financial regulatory field,” said an official at the Shandong office of the CBRC.

Guo career background is exceptional among Chinese officials for its breadth of experience that includes local government, industry regulatory agencies and financial institutions.

Before heading the CSRC, he served as chairman of China Construction Bank (CCB), one of China’s four main banks. Previously, he was the director of the State Administration of Foreign Exchange.

His experience in both the securities and banking sectors has fueled speculation that his appointment marks a possible beginning of a long-expected overhaul of China’s financial oversight system, which may consolidate the three existing regulatory commissions that oversee insurance, banking and securities, according to a CBRC official.

China’s fragmented financial regulatory system — in which each regulatory agency has different rules and oversees different parts of the financial industry — has faced increasing challenges, especially as they try to effectively detect and tame risks linked to innovative, cross-market financial products.

At the March 2 news conference, Guo dismissed speculation about any institutional consolidation, but he did emphasize coordination among different regulatory bodies and tightened supervision to rein in increasingly risky practices that endanger financial stability.

Managing trouble in the banking industry is not a new task for Guo, who spent over six years as CCB chairman. He took the helm in March 2005, when the bank was rattled by a corruption investigation of former Chairman Zhang Enzhao and a stalled shareholding restructuring.

Under Guo’s leadership, CCB listed on the Hong Kong Stock Exchange in October 2005, becoming the first state-owned bank to go public. CCB next went public on the Shanghai Stock Exchange in 2007, raising 58 billion yuan, which was the highest initial public offering on a Chinese stock market at that time. Guo is also credited with improving CCB’s financial performance and internal governance: The bank reported record profits for the first half of 2011 before Guo’s appointment to the CSRC, with profits rising 31 percent to $14.5 billion.

But the stakes are even higher for Guo as he takes on oversight of China’s banking industry, which is vulnerable to multiple risks from surging financial leverage, souring assets and an expanding shadow banking system.

CBRC data showed that by the end of 2016, Chinese commercial bank’s non-performing loans (NPL) reached 1.52 trillion yuan, or 1.74% of the total outstanding loans. Off-balance sheet assets — including wealth management products and other businesses that are used by banks to extend loans while circumventing loan quotas and various regulatory requirements — have exceeded 40% of the banking industry’s total assets of 232 trillion yuan by the end of last year.

Risks in the banking sector are increasingly intertwined with other sectors of the financial market, as capital and investors are closely tied together through structured investment products issued by different financial institutions. Banks, insurers, trusts and other institutions have increasingly invested in each other’s asset management products (AMPs) to earn higher returns or fat commissions. But such practices add to the complexity and interconnectedness of the financial system and increased the risks of a chain reaction of defaults.

The issuance of AMPs has ballooned to over 100 trillion yuan over the last few years, partly due to the government’s financial liberalization policy. Many of the products were offered to small retail investors at a fixed return and invested in long-term, sometimes risky, projects. But a large part of the cash flows of such products falls outside proper regulatory oversight as the lack of collaboration among regulators created loopholes that were easily exploited.

“Different regulators, different laws, different rules have caused some chaos,” Guo said. The current supervision on asset-management products is like “caging a cat with a cattle fence,” he said.

Although it is still unclear whether a sweeping institutional consolidation will be launched in the financial supervisory system, regulators made an unprecedented display of unity in February by proposing one overarching regulatory framework for the asset management business that transcends their respective individual jurisdictions.

The central bank, CSRC, CBRC and the China Insurance Regulatory Commission are jointly drafting the regulation, which “will set basic and unified standards that everyone must follow. Then each agencies can set higher standards for specific sectors,” Guo said.

An immediate challenge for Guo is tackling banks’ massive but lightly regulated wealth management business, which has become an important part of the expanding shadow banking system and a major source of capital that is fueling the explosive growth of the asset management business.

Figures from the Asset Management Association of China show that the value of outstanding wealth-management products issued by banks by the end of June was 26 trillion yuan, up from 15 trillion yuan at the end of 2014.

The huge amount of money raised through banks’ wealth management products is largely from small retail investors who seek higher returns than ordinary deposits. The funds are invested into other institutions’ AMPs and different assets, including mining, property, stocks and bonds, through structured financial derivatives, “fueling asset bubbles” while brewing systemic risks, said a market analyst.

Guo emphasized the “prudent principle” in banking supervision and efforts to bring loosely regulated off-balance sheet business onto the balance sheet, echoing the central bank’s tightening efforts. Earlier this year, the People’s Bank of China decided to include AMPs in its Macro Prudential Assessment system, a points-based framework adopted by the central bank at the start of 2016 to gauge risks in bank-credit exposure.

Cao Yu, a deputy chairman of the CBRC, said that the commission is drafting a separate regulation on bank wealth-management products, which will direct banks to invest wealth management funds into more transparent assets and rein in excess leverage and mismatch between the maturity of the money raised and the underlying assets being invested in.

Guo also pledged to clamp down connected-party transactions and flaws in commercial banks’ corporate governance, as well as those who illegally try to obtain control of banks through proxy shareholders to dodge regulatory rules.

Guo noted that the CBRC is paying close attention to risks linked to real estate bubbles, as 45% of new loans issued by banks last year went to the property sector, with most going to personal mortgages.

Although the overall leverage of Chinese households was not high, the rapid growth over the last two years is worth monitoring, Guo said, adding that banks should prudently extend loans to the real estate sector.

As CCB chairman, Guo told Caixin in a 2010 interview that a healthy financial system can’t simply rely on regulation but that efforts must be made to build sound institutions and market structures. The key issue of financial supervision, he said, is making everyone in the system be prepared for risks.

Now, as the top industry regulator, he again stated at the March 2 news conference that the financial regulator and institutions should each bear their responsibilities in risk management and each individual in the industry should be accountable.

“The system is very important, but the human factor is even more important,” he said.