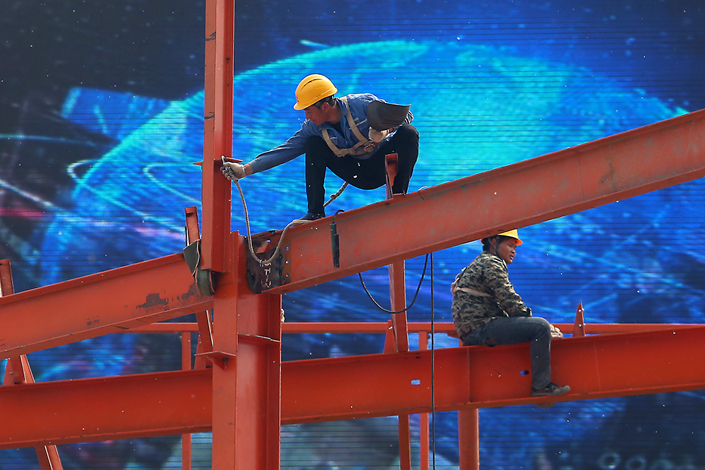 If the uptick continues through December, the nation’s annual gross domestic product (GDP) growth rate could reverse course after falling or flatlining for six straight years and thus upend government plans for a rate of “around 6.5%, or higher if possible” in 2017, compared to 6.7% last year. This year’s target was recently unveiled by Premier Li Keqiang.

The National Bureau of Statistics (NBS) said the nation’s producer price index (PPI), which tracks the wholesale price of goods, finished up a dramatic 7.8% year-on-year in February. And the official manufacturing purchasing managers’ index (PMI), which is weighted toward state-owned enterprises (SOEs) and heavy industry, rose 0.3 points from January to an expansionary 51.6 in February.

A separate manufacturing PMI, which focuses on light industry and service industry and is sponsored by Caixin, stayed above 50 in expansionary territory for eight consecutive months, to hit one of the highest levels in more than four years in February.

Industrial profits have risen as well. Cumulative corporate profits climbed 8.5% last year after falling 2.3% in 2015, according to the NBS. Manufacturers have responded to the earnings climate by boosting investment, which in December rose 2 percentage points from the previous month to 10.2%, the NBS said. Total manufacturing investment ended the year up 4.2% from 2015.

Despite these and other signs of robust economic activity, though, the jury is still out on whether the latest uptick can be sustained over the long term.

Against the backdrop of positive PMI and PPI data, some optimists are pointing to higher-than-expected infrastructure spending, real estate developer investment, strong home sales in small cities, and robust demand for Chinese exports as signs that GDP growth may rebound to as much as 6.8% this year.

But skeptics see the recent upturn as cyclical and not clearly indicative of sustainable economic expansion. Some argue the growth engines underpinning the expansion that started last summer will likely lose traction later this year.

Indeed, the government’s cautious GDP goal for 2017 points to its increased emphasis on pivoting away from expansion and working hard to contain risk. No wonder the official Xinhua News Agency described Beijing’s 2017 economic growth target as the least ambitious in 25 years.

Some analysts attribute recent economic improvements to a successful government campaign aimed at reducing excess production capacity in certain sectors, such as the steel industry.

The drive brought industrial supply closer in line with demand and fueled speculation on commodities that boosted prices, according to analysts. As a result, the year-on-year PPI has swung back to positive territory since September after a 54-month decline.

But doubts have been raised about the fight against surplus capacity because it has been motivated by the government rather than the market.

Xu Zhong, director of research at the People’s Bank of China, notes that the government process for trimming SOE output has not been market-based. Instead, he said, it’s following the same top-down bureaucratic path that led to factory overcapacity in the first place.

Jiang Chao, chief macro analyst at Haitong Securities, said government spending on infrastructure, as in the past, has been a key driver. “It’s still the same familiar formula,” he said.

And the bureaucratic path has pitfalls. For example, Xu said, recent efforts to cut steel and coal production led to rapid domestic price increases as well as coal shortages that forced a significant increase in coal imports.

As Xu sees it, government infrastructure spending and a hot real estate market were key factors contributing to economic improvements in 2016. However, he said, neither development is likely to fuel sustained growth through 2017 because each is riding on debt. For example, governments borrowed to build roads, and consumers took out mortgages for new homes.

According to Ha, without debt-fueled infrastructure spending and real estate investments, China’s economy would have grown only about 4% last year.

Meanwhile, analysts say, a big jump in infrastructure spending, heralded recently by state media, may be less effective for the overall economy than some believe.

Recently released 2017 spending plans for 23 provincial-level governments point to plans for a combined 45 trillion yuan ($6.5 trillion) in infrastructure investments this year. The Xinjiang region’s target, for example, is 50% higher than its 2016 spending level.

But as a Ping An Securities report recently noted, year-end figures show actual government-led investment growth has averaged 3% to 5% below provincial growth targets annually since 2013.

Yu Bin, director of the Development Research Center at the State Council, China’s cabinet, said the nation’s 30-year-old development push has left little room for new projects that offer investors the potential for high returns. Thus, most projects today require strong government support, even though fiscal revenue growth levels have been falling around the country.

Complicating the quest for infrastructure growth is the government’s effort to crack down on shadow banking and other fuzzy fundraising tools sometimes used by local governments.

In January, the Ministry of Finance ordered local government commerce and banking officials in Shandong, Henan and Sichuan provinces, the Inner Mongolia region, and Chongqing municipality to deal with illegal-lending problems. The order said municipal and county-level governments as well as companies and financial institutions would be held accountable for facilitating illicit borrowing and lending.

The 2016 Central Economic Work Conference identified financial risk prevention as a high priority. And on Feb. 28, at a meeting of the Central Finance Leading Group, President Xi Jinping stressed the importance of controlling financial risk.

Niu Li, head of the National Information Center’s Department of Economic Forecasting, said all kinds of shadowy borrowing will likely be exposed in the near term as local government revenue growth slows and the central government tightens its crackdown.

The economy’s recent uptick has given officials more leeway to rein in financial risks, which means investment will slow as investors find it more difficult to access capital.

Analysts say the latest economic growth trend may be sustainable if it is dependent on endogenous and price-linked drivers such as private investment, manufacturing investment and household consumption.

Yu Yongding of CASS has cautioned against any assumption that the upward trend will continue. He noted that more than two years of price-growth shrinkage after the start of the 1997 Asian financial crisis was followed by a rebound for the PPI that lasted slightly more than a year starting in early 2000, but that a complete rebound for prices did not emerge until 2003.

Contributing more than 80% of the PPI increase were companies in resource industries such as oil exploration and coal mining. Downstream industry pricing accounted for only 17.4% of the increase.

Hua Chuang Securities Chief Economist Niu Bokun said the latest price increases do not necessarily indicate improved demand, given that they largely stem from government orders to companies to cut capacity. In fact, Niu said, the latest PPI figures may reflect a price bubble that could pop based on weak demand.

Neither are experts upbeat about private investment, which grew only 3.2% last year, compared to 10.1% in 2015, according to the NBS.

Private investment has slowed as investors react to declining returns, said the CASS’ Zhang. The average return on equity among publicly listed companies in 2015 fell below their financing costs for the first time since 2002, he said.

Li notes, however, that investors could hold back unless there’s market consensus about rising commodity prices. Because month-on-month PPI gains as well as commodity price growth have slowed recently, Li doubts any possible acceleration in overall private or manufacturing investment would last more than a year.

Li thinks downward pressure on China’s economy will grow in 2018.

Analysts have also voiced concerns about the sustainability of consumer spending growth.

Consumer spending accounted for 64.6% of GDP growth last year. However, per capita disposable income rose just 6.3% in 2016 from the previous year, marking the first time in years that the figure fell below the GDP growth rate.

Real estate markets in some parts of the country have wowed forecasters in recent months. Sales in third- and fourth-tier cities have been especially strong. And one of China’s biggest developers, Country Garden, reported its sales grew 273% in January compared to the same period last year.

Industry sources told Caixin the real estate boom in some cities was at least partly driven by local government incentives such as tax cuts and subsidies.

Nevertheless, the National Research Center’s Yu said a consumption growth rate above 10% is unsustainable in the face of declining consumer income growth, since consumers rely on loans for big-ticket purchases such as homes and cars.

Leverage has been increasing across the board ever since the 2008 global financial crisis. Total government leverage rose to 45% in the second quarter of 2015 from 27% in 2008, according to the central bank’s research institute, while household leverage nearly doubled to 41% during the same period.

Consumer borrowing has driven the real estate market higher in recent months, contributing to the recent upturn for the economy. But market uncertainties emerged after government efforts since October aimed at stabilizing prices and clamping down on speculative buying.

Zhang thus predicts stable momentum for the nation’s GDP growth rate in the first half of 2017 followed by a weaker second half. Nevertheless, he said, the annual rate may still meet the government’s 6.5% target.