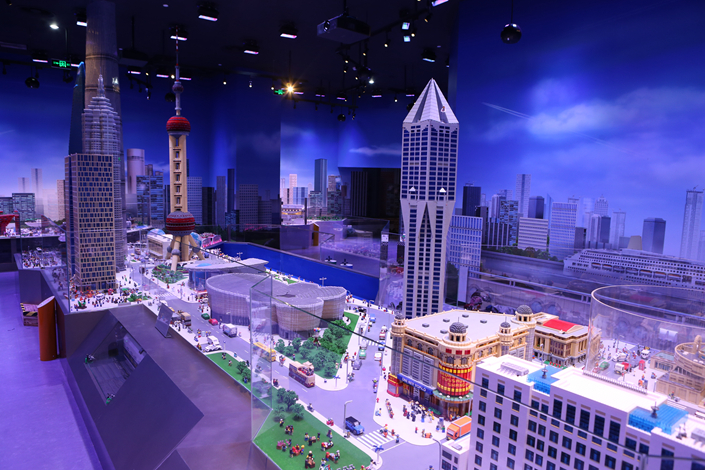 An exhibit is displayed at the Shanghai Legoland Discovery Center in 2016. Merlin Entertainments Group is planning to launch a Legoland theme park in Dianshan Lake in Shanghai in 2022. Photo: IC

The new park will be located in a western suburb of Shanghai, with construction work scheduled to finish by 2022, according to a statement from Merlin’s Chinese partner Joyu International Tourism Operation Group on Wednesday.

It will be Merlin’s first outdoor theme park, adding to its current portfolio in Shanghai, including a Madame Tussauds, the Chang Feng Ocean World aquarium and a Legoland Discovery Center — a smaller, indoor version of Legoland.

Merlin also plans to launch another Legoland in Beijing, and three more discovery centers in Chongqing and Shenyang, according to the statement.

Legoland’s arrival will intensify competition in the country, which is already fierce among rivals such as Shanghai Disneyland, which has hosted 7 million visitors since its opening in June, Universal Studios, which is currently constructing a theme park in Beijing, and U.S. operator Six Flags Entertainment Corp., which is set to open two parks in China by 2020.

A growing middle class and rising incomes have spurred domestic developers like Dalian Wanda Group and Evergrande Group to join the game as well. China is expected to surpass the U.S. as the largest theme-park market in the world by 2020, attracting 221 million people every year, according to U.S. consulting firm Aecom.

However, this doesn’t mean that Chinese companies are destined to fail, because many of them are targeting residents in smaller cities, with special Chinese architecture styles, which will help them gain different groups of visitors, Chen said.

The opening up of policy has also contributed to the emerging sector. In 2013, the top economic planner, the National Development and Reform Commission in tandem with 12 other authorities eased the threshold by enabling developers with a project value of less than $1.5 billion yuan ($220 million) to be approved at the provincial government level rather than at a national one.

The cost of building Shanghai’s new Legoland has not been disclosed, but the latest one in Dubai cost around $250 million, according to Dubai magazine Arabian Business.