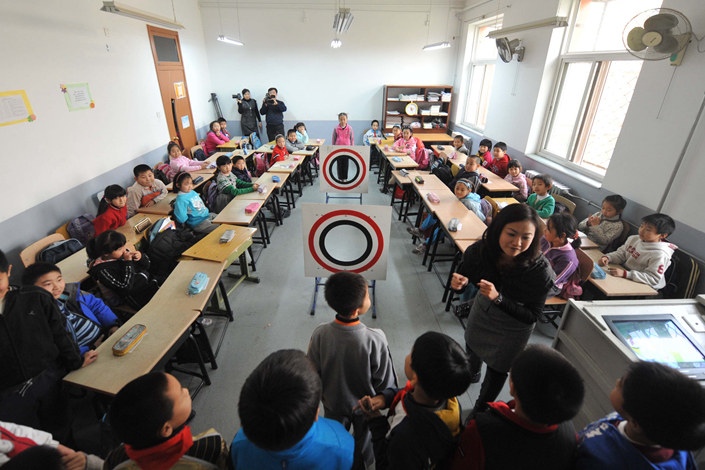 Primary-school students participate in a sex-education class in Beijing in December 2010. A sex-education book used by second-graders in a school in Hangzhou has been recalled by officials after a mother complained that the material was too explicit for children that age. Photo: Visual China

(Beijing) — A sexually explicit book on an extracurricular reading list for second-graders has set off a firestorm on social media in China.

The controversy erupted after a second-grader at Xiaoshan Gaoqiao Primary School in Hangzhou, Zhejiang province, apparently brought home a book that had an illustration of a couple having sex in a bed; depictions of same-sex parents; and a scene of a young boy who becomes uncomfortable when a relative makes sexually charged remarks.

The mother felt the contents were inappropriate for young children.

“Is this what a second-grader should learn about, and is it all right to put together a book this way?” the mother asked on Feb. 28 on the microblog Weibo, China’s version of Twitter. Since then, parents, educators, and advocates against sexual abuse of children have battled over what children should be taught about sex and at what age.

As the microblog debate heated up, an administrator at the boy’s school this week told China News Service that the books on the list will be recalled until school officials have had time to consult with parents and others.

“The books have proved to be good for students’ upbringing, but we need to consult with all parties before we decide to make the best use of them after the controversy,” the administrator told China News Service.

In China, sex education is taught at primary schools only through one chapter in the subject of physiology. Some academics in the country have called for more sex education to address issues such as sexual assault of minors.

“The fundamental issue is that there are no clear criteria or practical standards in China about what should be included in sex education for children in China,” said Tong Xiaojun, a professor of child and teen studies at China Youth University of Political Studies.

The book at the center of the debate — Cherishing Life: Sexual Health Education Books for Primary Students — is part of a project by Beijing Normal School at 18 schools in Beijing attended by many children of migrant workers. The program, which began in 2010, focused on such children because they may be especially vulnerable to sexual abuse because they tend to have less parental supervision, said Liu Wenli, the primary author of Cherishing Life.

Liu told Caixin that she and the writers followed guidelines for sex and HIV-prevention education as recommended by UNESCO, an advocacy agency with the United Nations. UNESCO couldn’t be immediately reached for comment.

Sexual activity may start later in China than in many parts of the world. Beijing residents reported they didn’t have their first sexual encounter until they were nearly 21 on average, while in other parts of China the average age is over 22, according to a joint survey in 2015 by Peking University and a dating website Baihe.com.

Some Weibo users said the books could encourage young children to experiment sexually, mimicking what they saw.

But other microbloggers defended early sex-awareness training, citing recent studies showing increased reports of sexual abuse of children. They argued young children are easily exploited if they are clueless about sex and protecting themselves.

“Are the books enough to make us pay more attention to sex education, as we’ve seen so many cases of sex assault against children?” one person wrote on the Weibo website.