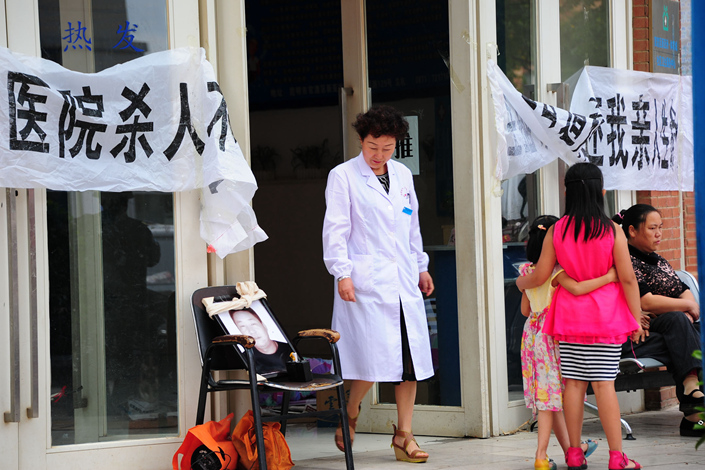 Family members of a man who died in a hospital in Kunming, Yunnan province, stage a protest while trying to block the door of the hospital on Aug. 27, 2015. The banner says "The hospital kills people ..., return my beloved ..." The National People's Political Consultative Conference has proposed an insurance plan that would compensate patients whose medical care had complications. The delegates said such insurance would reduce attacks of medical personnel by angry patients and their families. Photo: IC

(Beijing) — Delegates on China’s top government advisory body have proposed an insurance plan that would compensate patients whose medical care had unexpected complications.

The plan was floated this week at the Chinese People’s Political Consultative Conference (CPPCC) meeting in Beijing as a way to prevent attacks on doctors and hospital staffers by angry patients.

Patients and their relatives have assaulted dozens of medical staffers across China in recent years while arguing over payments, operations that have gone awry, and other issues. At least a dozen doctors have been killed.

Officials have linked the violence to medical system corruption, public distrust toward doctors, and the fact that China has no transparent, independent system for settling health care disputes.

The proposed plan, which would supplement China’s public health insurance, would be financed by the government and offered to all patients.

Gao Chunfang, head of the China Medical Law Society and a CPPCC member, supports the insurance plan, noting that most medical care complications are rooted in the limits of modern medicine, not malpractice. Thus, he said, it makes sense for patients to be insured against damage for which hospitals and doctors are not responsible.

“Patients can be properly compensated, while hospitals would not have to deal with angry patients,” Gao said.

Wen Jianmin, a surgeon who serves on the CPPCC, said doctors should not be blamed for problems such as high prices and substandard services in the nation’s hospitals, most of which are public. Neither should they ever be assaulted, he said.

“We’re been trained and have the expertise to treat patients, not fend off scoundrels,” said Wen, head surgeon at the Chinese Academy of Chinese Medical Sciences’ Wangjing Hospital in Beijing, at a forum on the sidelines of a CPPCC session Thursday.

Violent doctor-patient disputes have been so rampant in recent years that the media coined the word “yinao” — Mandarin for “medical disturbance” — to describe the phenomenon of violent confrontations between patients and medical staffers.

The most recent case of yinao was in Laiwu, Shandong province, where police in October detained a man following the death of a pediatrician at a hospital. The alleged assailant blamed the doctor for the death of his newborn baby in January 2016. The case is under investigation.

Well-publicized corruption cases have contributed to public distrust of doctors as well.

Health authorities in Shanghai and the city of Changsha, Hunan province, last year suspended five doctors caught on camera by an investigative news team from China Central Television. The investigation revealed that some doctors had accepted kickbacks from pharmaceutical companies in exchange for prescribing their drugs to patients.

Some health care workers say drug company kickbacks are justified in light of their low salaries. But kickbacks have been blamed for pushing patient costs higher, according to medical ethicists.

Professor Li Lanjian of Zhejiang University’s School of Medicine, and another CPPCC member, said insurance can offer patients as well as doctors their due protection when medical treatment or procedures fail to bring the intended result.

At the same time, though, Li said police agencies should protect medical workers from assault.

Police have indeed stepped up their efforts to protect medical workers in recent years. As a result, nationwide criminal cases linked to such attacks fell to 866 last year from 1,351 in 2013.

But some health care sector observers say officials should do more. One idea is to create an independent arbitration system that can analyze medical complications and rule whether they were accidents, industry watcher Zhu Dazhi said.