Shortage of Doctors, Absence of Insurance for Transplant Surgery Leave Patients in Limbo

By Jia Yingliu and Poornima Weerasekara 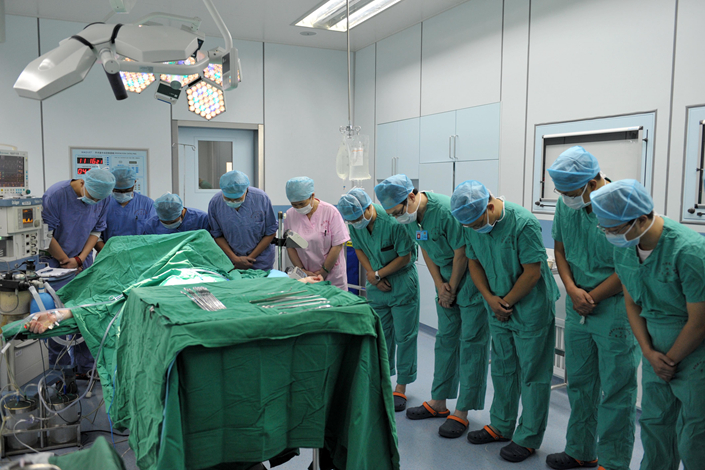 Hospital staff bow to an organ donor in Kunming, Yunnan province, on July 17, 2013. Only about 120,000 organ donors have registered in China over the past five years — less than one-tenth the number of those who need kidney transplants alone. Photo: IC

(Beijing) — Despite a rise in the number of registered organ donors that followed a creative online campaign, patients in need of transplants face long waits due to a shortage of doctors and the cost of surgery not covered by state plans, health experts say.

“There are so few qualified surgeons in the country, I can literally name everyone who can carry out a heart- or lung-transplant operation,” Huang Jiefu, a former health vice minister who has been pushing for reform, told Caixin.

Out of the 147 lung transplant operations conducted in China in 2014, over 100 were done by a single team of surgeons, The People’s Daily reported in April.

The acute shortage of doctors in China has led to a waste of donated lung resources, said Zhao Hongtao, deputy secretary general of the China Organ Transplantation Development Foundation (COTD), which runs one of the largest volunteer registration services in the country.

Since China ended the controversial practice of harvesting organs from executed prisoners in January 2015, the government has been pushing for voluntary donations. But only about 120,000 donors had registered over the past five years — less than one-tenth the number of people in need of kidney transplants alone.

“This number was so low that it pained one to say it,” COTD Vice Chairman Liu Xiuqin said. “It was abysmal compared to the huge demand.”

Faced with a dearth of organs, health officials took action. Through a tie-up with popular online payment service Alipay that began on Dec. 22, 10,000 donors volunteered in just two months, according to Hou Fengzhong, deputy director of the China Organ Donation Administrative Center. The new system cut enrollment time to less than a minute, Hou said. An earlier donor registration form seen by a Caixin reporter comprised nearly 20 questions, including ones about academic qualifications, ethnicity and household registration, or hukou. The partnership also allows health authorities to reach out to the 450 million users of Alipay.

Despite this uptick in the number of donors, many patients are still struggling to find a kidney or liver for transplant on time because the country lacks a national donor registry. At present, a handful of state-backed charities, including the Red Cross Society of China, undertake donor registration campaigns, and there are two organ-matching services in the country.

Earlier this week, Huang proposed legislation to streamline the functions of the different agencies at the Chinese People’s Political Consultative Conference, the top advisory body to the government.

He also proposed changes to the national medical insurance program to cover the cost of liver, lung and heart transplant operations. Transplanting a kidney costs about 200,000 yuan ($28,950), the equivalent of undergoing dialysis for 19 months. But many patients opt out of surgery because the state-backed insurance program does not cover the high cost involved, Huang said.

In 2016, over 12,000 transplants took place, using organs from about 4,000 donors. But Zhao said about 300,000 patients on average suffered from organ failure each year, although not each case required a transplant.

“Many say that traditional ideas (such as the Confucian belief that a person’s body should be buried intact) are preventing organ donation in China, but actually the obstacle is the ineffective transplant management system,” Huang said.