By An Limin and Li Sijia 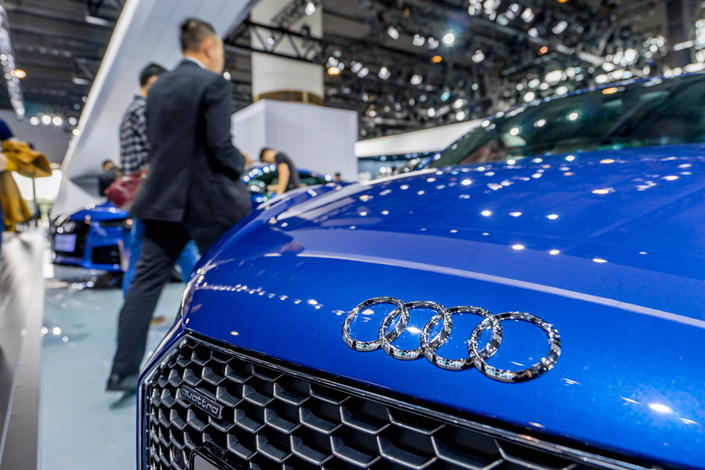 An Audi car is displayed during the 14th China (Guangzhou) International Automobile Exhibition in Guangzhou, Guangdong province, on Nov. 25. This year has already been tough on the German automaker, whose future in China looks increasingly uncertain. Photo: IC

In China, the four overlapping rings of the Audi logo have long been synonymous with success and status. As an early market entrant, the luxury-car brand quickly became the de facto mark of officialdom, dominating government and state-owned fleets, and the ultimate aspiration for ordinary people.

The strength of the Audi brand in China was once unrivaled, even by competitors Mercedes-Benz and BMW, whose global operations were stronger than Audi’s.

But 2017 has dealt blow after blow to the German automaker, whose future in China looks increasingly uncertain. The company sold just over 35,000 units in January, down 35.2% compared to the same period last year. It is the first time since entering the China market that monthly sales have lagged behind Mercedes-Benz and BMW, who both experienced double-digit sales growth the same month.

Audi’s sales slid further in February, when the automaker sold only about 32,000 units in China, down 6.3% year-on-year.

In the same month, Audi’s China distributors met in the resort town of Sanya to establish a dealer’s association where they issued a statement opposing Audi’s plans to establish a second joint venture in China until the carmaker could achieve annual sales of 1 million units, roughly twice the 591,600 units sold in 2016.

Long-term dissatisfaction with the ownership structure of the 22-year-old existing joint venture with China’s FAW Group Corp. led Audi to sign a memorandum of understanding with SAIC Motor Corp. in November. The goal was to set up a second production and sales network in China and reduce reliance on FAW. The vehement opposition of Audi’s dealers, who even threatened to suspend sales in the country, means the future of this joint venture, and Audi’s China prospects, are increasingly uncertain.

When photos of the signing ceremony between Audi and SAIC began to circulate in industry circles, all but the largest dealers, who were informed by Audi in advance, were caught completely off guard.

Profits in the once-lucrative area of car distribution have been squeezed in recent years as automakers sought to aggressively expand sales channels. Dealers feared Audi’s push to establish an entire new distribution system would be the final nail in the coffin of their businesses.

In a meeting with Audi China head Dietmar Voggenreiter on Nov. 21, dealership investors threatened to suspend sales within a week if Audi didn’t provide a clear answer on how it would protect dealer investments.

This forced Audi to take a step back, and on Nov. 30, after eight hours of negotiations with dealer representatives, an agreement was reached that the SAIC deal could continue only if current dealers could achieve long-term profitability, and that any new SAIC distribution centers would be agreed upon by the two parties.

But tensions remained high. Conventionally, sales targets and production plans for the coming year are agreed upon before the end of the previous year. But despite being already well into the third month of the year, Audi and its dealers have yet to nail down a target.

On Jan. 17, Volkswagen Group China CEO Jochem Heizmann said that the SAIC partnership would not be up and running until current issues with existing partners could be addressed. He said he did not expect the new company to be operational until at least 2018.

After the February release of the “Sanya Statement,” the ball is in Audi’s court. Agreeing to the dealers’ demands to hold off until annual sales reach 1 million would halt the SAIC deal indefinitely, as accumulating downward growth pressure means reaching this goal in the near term is unlikely, according to Liu Yan, a former member of FAW-VW’s sales department.

But ignoring them means risking their wrath, or more specifically that they will make good on threats to suspend sales. With China accounting for more than 30% of Audi’s global sales, this is a risk the carmaker can’t afford to take.

Audi’s other option is to stick it out with FAW and improve on its existing distribution system to boost sales. So far, FAW has remained quiet on Audi’s proposed plans to partner with SAIC. But a person close to FAW executives confirmed that the Chinese automaker is considering a 50-50 joint-venture sales company with Audi as a way to discourage the SAIC partnership. On Jan. 17, FAW and Audi signed a 10-year business plan in FAW’s home base of Changchun in Jilin province. The same insider said the joint venture was a core component of the plan.

Audi has long harbored resentment over the distribution of sales profits from FAW-VW, which is 60% owned by the FAW Group, 20% by Audi parent company Volkswagen AG, 10% by Volkswagen China and 10% by Audi. China’s industrial policy dictates that foreign automakers enter the mainland market through 50-50 joint ventures with local partners. FAW’s 60% stake was a result of a failed bid to give a 10% stake to a Taiwan-based company when the joint venture was created in 1995; in the rush to get things up and running, these shares were instead given to FAW.

Following the boom in private spending on cars in the 2000s, the issue of adjusting the stock structure was so contentious that it became a topic of negotiation between China and Germany. Eventually, an agreement was reached in which FAW would sell 9% of its shares to Audi. By July 2015, the deal was in the process of being approved by Chinese regulators, according to sources close to FAW-VW.

But compensation costs of up to 752 million euros ($802 million) incurred following parent company VW’s emissions cheating scandal meant Audi didn’t have the cash to go through with the deal. FAW’s willingness to set up a 50-50 sales company with the German carmaker could be a win for Audi, as it would mean the larger cut of sales profits the company was hoping to secure without the need to invest too much capital.

Audi may not have a choice. Besides dealer efforts to thwart the SAIC deal, FAW is already in the process of seeking government support to block approval of the SAIC-Audi deal, sources close to the matter told Caixin.

So with mounting opposition and a viable alternative, what does the SAIC deal bring to the table?

Heizmann rationalized the move, saying growth in China’s high-end car market is projected to be way above overall growth and that the deal is a way to add additional sales channels. He said the market is big enough that the two joint ventures will not be competing for sales. Sources close to Audi told Caixin that the German carmaker particularly values SAIC’s R&D and innovation capabilities.

But many sources say the key thing SAIC brings is change. As Audi finds itself under pressure from diminishing government support and a brand that is losing its cache, executives see a new partner as a way to inject energy into operations.

The automobile industry has always operated at the intersection of business and politics in China. It is no secret that Audi owes a great deal of its success in China to the boost its brand got from government procurement that made it the de facto car of the powerful and connected.

But amidst a widespread campaign to promote domestic industry and brands, since 2012, Audi has been removed from official government procurement lists. The FAW-owned Hongqi marque—the name means “red flag” in Mandarin — has become Audi’s replacement. In 2013, 12 ministers had swapped their Audis for Hongqi H7s.

Besides the direct losses of declining government procurement, the blow to the brand has also been pronounced. Official procurement made Audi synonymous with black cars with tinted windows, but this image is losing its appeal. Still, efforts to rebrand, like a color-car strategy in 2015, have been largely unsuccessful.

In third- and fourth-tier cities, the black Audi A6s still have a certain appeal, according to an Audi dealer. But in bigger cities and among younger consumers, they are increasingly unfashionable.

In contrast, Mercedes-Benz and BMW are seeing a huge uptick in demand for their brands. Both sold over 50,000 units in January, representing a 39.3% increase for Mercedes and an 18.2% increase for BMW compared to last year.

On top of this, Audi is still reeling from a series of anti-corruption investigations against executives at FAW and FAW-VW beginning in 2014 and the financial hit of Volkswagen’s recent emissions-testing scandal.

The squeeze has pushed Audi to cut spending on costly projects. In October the company announced it had withdrawn from the FIA World Endurance Championship, including the 24-hour-long Le Mans race. At the beginning of this year, the company closed Audi City Beijing, its largest exhibition hall in the world.