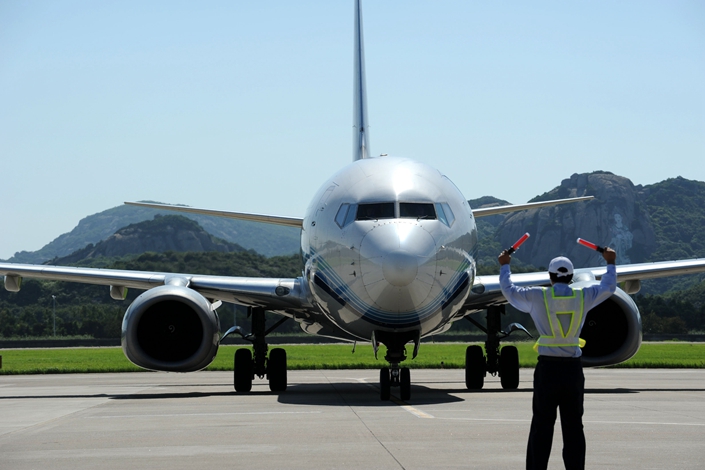 A jetliner lands at Zhoushan Putuoshan Airport in Zhoushan, Zhejiang province, on July 25, 2012. The airport is undergoing a $109 million expansion as Boeing Co. plans to build a finishing facility in the city for company jetliners. Photo: Visual China

(Beijing) — Commercial aircraft giant Boeing Co. will break ground on a plane finishing facility in the Chinese city of Zhoushan by the end of this month.

The announcement marks the cumulation of years of lobbying by Beijing to move some production to a market that’s set to pass the U.S. to become the world’s largest for civil aviation in the next decade.

Preparatory work for the facility has been underway in the coastal city since Boeing first announced in fall its plans to form the assembly joint venture with Chinese plane maker Commercial Aircraft Corp. of China Ltd. (COMAC). Actual construction is nearly ready to begin, with the first Boeing 737 planes set to roll off the new production line at the end of next year, the official Xinhua News Agency reported.

The facility will engage mainly in final assembly work for Boeing’s most popular model, including installation of entertainment systems, seats and other interior decoration elements. The facility will eventually have the capacity to produce 100 planes per year, and will employ about 2,000.

It will be Boeing’s first plane finishing center outside its home U.S. market.

To welcome one of the world’s top two commercial aircraft makers, Zhoushan is performing a major expansion of its regional Putuoshan Airport, which is expected to cost about 750 million yuan ($109 million). Work will include expedited construction of international facilities, and Zhoushan is also developing an aviation industrial park to promote the sector.

China is the world’s fastest-growing major aviation market, and is expected to surpass the U.S. by 2024 on explosive demand from the nation’s fast-growing middle class, according to the International Air Transport Association. The number of domestic and international travelers in the country is expected to reach 927 million by that year, nearly double the 487 million who took flights in to, out of or within China in 2015.

Boeing said in fall it expects that Chinese airlines are expected to buy planes worth more than $1 trillion over the next 20 years to meet rapidly expanding demand. It added it expects air traffic to grow by 6.4% annually in China over that period.

Boeing’s chief rival, Airbus SAS, set up its first China production facility in 2008 in the port city of Tianjin, also its first outside of its home European market. That facility also does final assembly work for Airbus’ most popular model, the A320, and is a joint venture with Chinese partners Tianjin Free Trade Zone and China Aviation Industry Corp.

As one of the world’s biggest aircraft buyers, Beijing has lobbied for years to get both Airbus and Boeing to set up production facilities and transfer more of their technology to China. The country is also developing its own large airliner, the Comac C919, which it hopes can someday compete with the Boeing 737 and Airbus 320 for a slice of the lucrative global commercial aviation market.